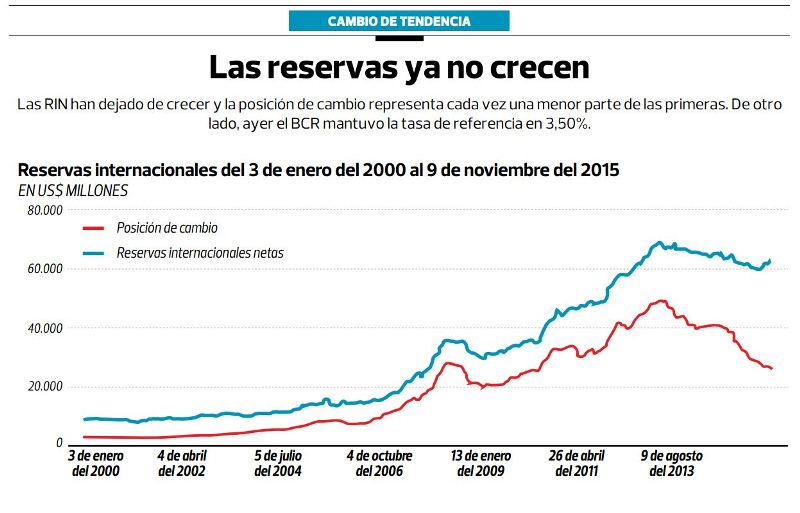 Peru’s central bank left its key interest rate unchanged but suggested the possibility of a hike in December as the dollar continues to gain on the sol.

The central bank left its key interest rate unchanged yesterday on news that annual inflation fell in October from 3.9% to 3.7%. While the bank’s chief economist, Adrian Armas, expects slightly higher inflation this month due to rising food prices, he expects annual inflation to fall in line with the target of 1% to 3% next year.

“There is a possibility of raising the key interest rate if inflation data is not what we expect,” Armas said.

The central bank is now worried that a continued fall in the value of the sol will heat up inflation just as it seems to be falling into the target range. The sol fell to a new low this year at 3.324 per dollar yesterday despite the central bank’s intervening to sell $32 million on the spot market.

However there are not enough dollar reserves to continue defending the currency. Peru’s central bank has spent over $24 billion to cushion the sol’s sharp falls against the dollar in the last two years. The central bank’s dollar reserves have fallen by almost half from $50 billion in 2013 to $26 billion today. The sol has fallen from a high of 2.60 per dollar to 3.33 over the same period.

“It has been a sharp fall,” says SAB economist Roberto Flores. “If Peru’s central bank maintains that pace of intervention, in two years the exchange reserves will go to zero. But evidently the reserve bank knows that and it is not going to keep that pace.”

Peru’s central bank acquired many of the dollars used to cushion the sol’s slide in previous interventions to slow the sol’s rise during the peak of commodity prices in previous years.

Peru’s central bank surprised the financial community in September by raising its key rate from 3.25% to 3.5% after several reductions in reserve requirements failed to stem inflation.