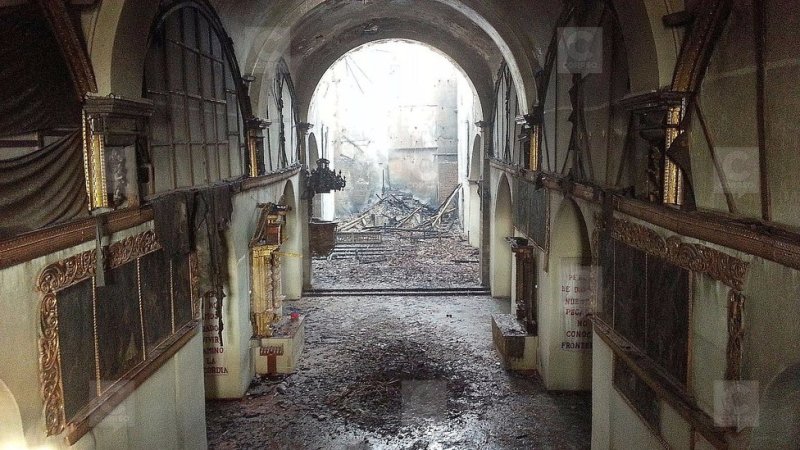 The San Sebastian Temple in Cusco was almost completely destroyed in a fire early Friday morning.

Firefighters were called to the 16th century church in Cusco’s San Sebastian district near the airport at 1:30 a.m. on Friday. They battled for five hours before bringing the flames under control. By that time, 80% of the church’s artwork and artifacts were destroyed.

“The altar was gorgeous, Andean Baroque. Obviously the paintings and sculptures have been the most affected,” culture ministry official Victor Vidal told Andina. “There is irreparable damage not just to the material heritage but also the sentimental, the feeling of the people of San Sebastian for this loss of the religious alma mater in this populous district.”

Among the artwork destroyed were several paintings and sculptures by Diego Quispe Tito, one of the leaders of the Cuzco School of mestizo artists who depicted religious scenes during Spain’s Catholic conversion of Peru.

The San Sebastian Temple had just undergone a $1.5 million restoration in 2012. It was declared national heritage in 1972. While most of what was inside the church was destroyed, the structure is still standing.

The fire was assumed to be caused by a short circuit. The chief of the Cusco firefighters said that three fire hydrants in the neighborhood did not work.

Cusco was the capital of the Inca Empire before Spain’s conquest of Peru. Cusco is the launching point for the nearby Machu Picchu ruins, Peru’s most popular tourist attraction.