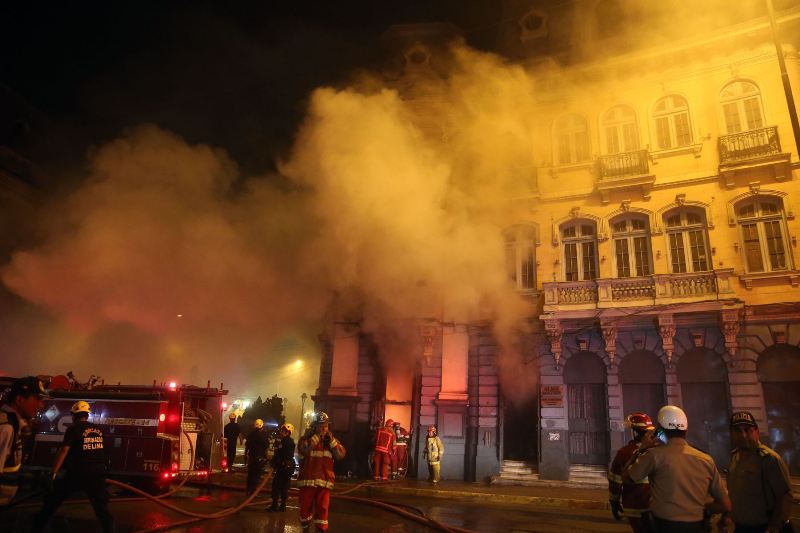 A republican-era mansion in downtown Lima’s Plaza Dos de Mayo was condemned after a fire in a musical-instruments store.

Authorities say a short circuit caused the fire around 7:30 p.m. on New Year’s Day in the building facing the circular plaza between Oscar Benavides Avenue and Zamora Street. There were no injuries as firefighters brought the blaze under control within hours.

Sunday night’s fire is the second in two years in the Plaza Dos de Mayo, which was built by industrialist Victor Larco in 1924 to commemorate the 1866 Battle of Callao, in which Peruvian naval forces repelled invading Spanish forces. In October 2014 a fire on the opposite end of the plaza caused the complete collapse of a building’s third-floor attic and partial collapse of the ceiling.

“Eight of us were affected by this fire, but by condemning the building 50 more are harmed,” one local merchant told Correo. He added that he lost $15,000 of merchandise in the fire.

“The way [these buildings look], I do not know if they will last another 30 years,” Alberto Larco, owner of one building facing the plaza and grandson of Victor Larco, told La Mula after the 2014 fire. Larco and others have criticized Peru’s culture ministry for not doing more to preserve the buildings of Plaza Dos de Mayo.

Located west of Tacna Avenue in a grittier neighborhood than the historic city center popular among tourists, Plaza Dos de Mayo is a common rally point for national protests and home to the headquarters of Peru’s largest labor union, General Confederation of Peru’s Workers (CGTP).