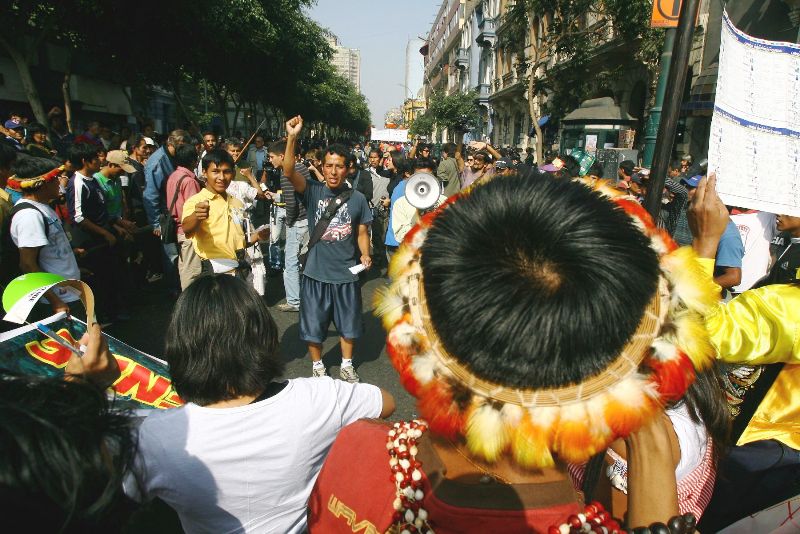 Indigenous rights groups from the Peruvian jungle will march in Lima tomorrow to commemorate the 2009 “Baguazo” conflict which left 33 dead.

Demonstrators will meet at the Plaza San Martin in downtown Lima at 5 p.m. tomorrow before marching to the Palace of Justice, where they will hold a vigil in the promenade of Paseo de la Republica avenue. The demonstration will commemorate the sixth anniversary of the bloody conflict.

“It is a day of commemoration of the tragic events in Bagua. But it is also a day to remember the indigenous people’s struggle to defend their land,” read a statement from the Inter-Ethnic Association of Peruvian Jungle Development (AIDESEP).

In 2009, hundreds of protesters blocked a highway in the Bagua province of Amazonas state to prevent the development of oil fields and logging in the area. After two months, the police attempted to dislodge the protesters to open the highway. On June 5, 2009, protesters in red face paint armed with wooden spears fought the police in clashes which left 33 dead, of which 23 were police officers, and over 200 injured.

The conflict led to the resignation of prime minister Yehude Simon and interior minister Mercedes Cabanillas. The tragic day came less than a year after President Alan Garcia’s entire cabinet resigned for the “Petroaudio” scandal, in which audio recordings showed government officials and Petroperu executives accepting kickbacks to steer contracts to oil companies.