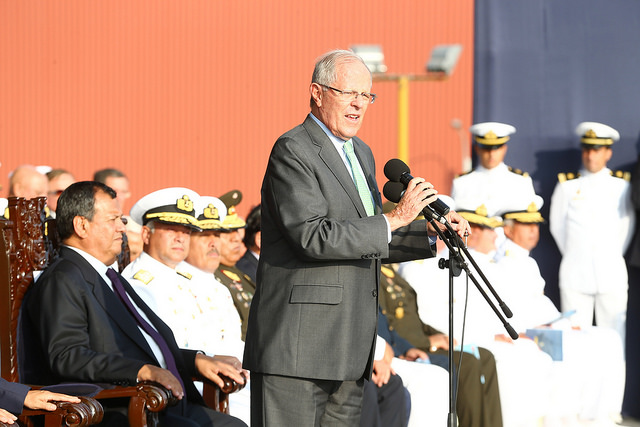 President Pedro Pablo Kuczynski is once again sinking in the Peruvian public eye.

Popularity for the leader, who has been in office for nearly two years now, has come down to a meagre 17 percent in a Sunday poll that was put together by the newspaper La Republica and the GfK Global market research company. While the leftist parties of Peru, the New Peru Movement (MNP) and the Broad Front, are enjoying a popularity rating of about 60 percent, Kuczynski has pointed to them as the cause for his low ratings.

The President said that his critics are part of a combined effort “to create a revolution from the extreme left.”

The numbers released show President Kuczynski in a bad light. Not only has the leader’s popularity fallen five percentage points since January, but 83 percent of Peruvians criticize the president’s policies and his political conduct. Moreover, the slight majority of Peruvians have voted for him to be removed, while 55 percent want to see him resign from his post.

Peru has seen his popularity ratings slipping for the past couple of months. The slip in ratings has begun even before his questionable Christmas pardon of the former President Alberto Fujimori for human rights violations, as well as Kuczynski’s alleged involvement in the Odebrecht kickbacks scandal for US$800,000.

A 9 percent slip was recorded between August and September of 2017. The reasons for this steady decline in popularity were cited as not just the corruption scandal and questionable pardon of Fujimori, but also his management style, which has been criticized by the Peruvian public.

MNP leader Veronika Mendoza says that removing Kuczynski from office is “indispensable” but not enough in seeking solutions to the various problems that surround the country.

She added that, irrespective of Kuczynski’s and his party’s conduct, the public view them as corrupt and as a force that has formed a “rift” between “those who have power, money and privilege and those who don’t have anything.”