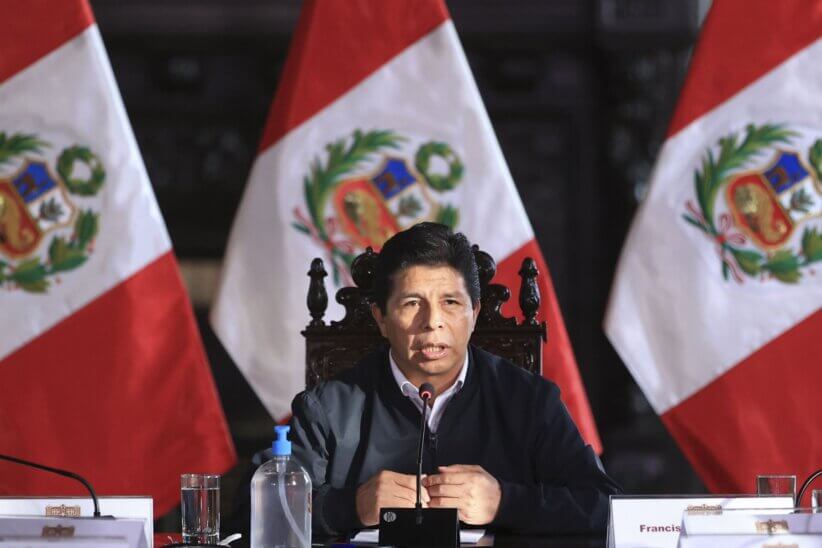 Lima, Peru — President Pedro Castillo announced earlier this month that Luiz Inácio Lula da Silva, Brazil’s president-elect, has invited him to participate in the inauguration ceremony that will take place early next year in Brasilia.

However, to attend, Mr. Castillo must request a travel permit to the Congress, which could be denied, as has happened recently.

A week ago, several opposition parties in Congress announced that they would reject the request of the head of state to attend the summit of the Asia-Pacific Economic Cooperation Forum in Thailand. On November 4, Mr. Castillo gave up the trip and withdrew the request sent to Parliament.

Additionally, on Monday, President Andrés Manuel López Obrador of Mexico announced that it was probable that a summit of leaders from the Pacific Alliance trade bloc — Chile, Colombia, Mexico and Peru — would be postponed due to Castillo’s travel restrictions.

Months earlier, Congress prohibited Mr. Castillo from traveling to several European countries, including the Vatican, where he was to be received by Pope Francis. In August 2022, the Parliament also denied him the right to travel to Colombia for the inauguration of President Gustavo Petro.

On both occasions, the opposition in Congress prevented Mr. Castillo from traveling, arguing that he has six criminal investigations open against him. The Public Ministry accuses the president of allegedly leading a corruption ring entrenched within the government.

On November 8, Mr. Castillo said on Twitter that he had talked with Lula da Silva to congratulate him on his victory in the presidential elections.”This morning I spoke with the president-elect of Brazil (…) to whom I reiterated my congratulations and expressed my good wishes for his purpose of strengthening democracy, the economy, social inclusion and the sustainable development of his country,” he wrote.

He also told him that he is willing to continue strengthening bilateral relations between the two countries in “common challenges of growth, human development, environment and security.”

“I appreciate the personal invitation he gave me to attend the inauguration ceremony,” he added.

The inauguration ceremony will take place on January 1, 2023, in Brasilia.