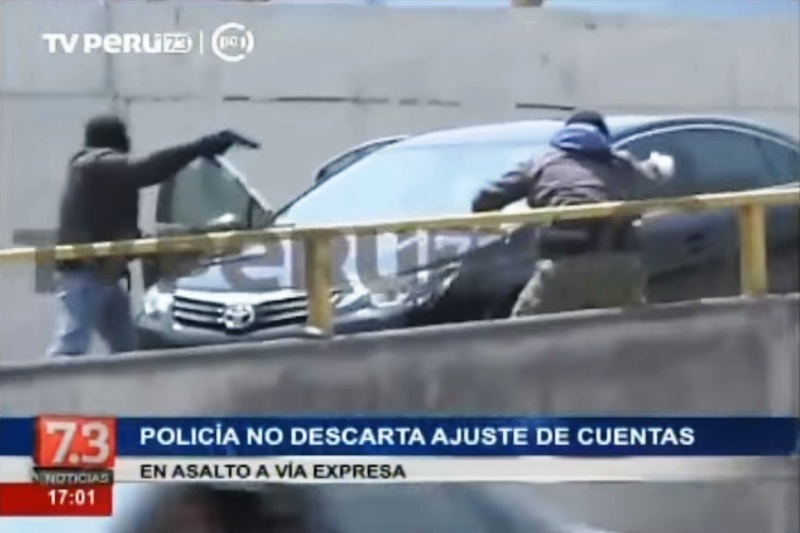 A currency trader targeted in an armed robbery was killed in central Lima on Friday morning.

Soon after withdrawing $70,000 from a bank in San Isidro, 74-year-old Carlos Becerra was riding with his driver and another man to his currency exchange storefronts in downtown Lima.

Just before 11 a.m., another car blocked Becerra’s car just as it was descending an entrance ramp on to the Via Expresa highway in La Victoria. TV Peru cameramen captured part of the assault in which three men in ski masks opened fire on Becerra’s car before taking a small suitcase from the back seat and fleeing.

Police arrived on the scene 10 minutes later. Becerra died en route to the hospital. The driver was not injured, but the third passenger received two bullets in the arm and abdomen. He is currently in critical condition.

Police found 24 bullet casings at the scene, most of which were fired at Becerra in the back seat. The nature of the shooting has led police to believe that Becerra was targeted not only for robbery.

“The attack was aimed directly at the back of the vehicle,” Lima police chief Cesar Gentille told TV Peru. “It is a robbery, but it also looks like revenge. That will be determined in the investigation.”

Various media outlets criticized the late arrival by police from a station just three blocks away. An official in the police unit to prevent bank robberies also criticized the failure to close the Via Expresa exit ramps after the robbery.

The assault comes three months after a similar robbery ended in a broad-daylight shootout with police. In that case, a local businessman withdrew $89,000 from a bank just blocks from where yesterday’s robbery occurred and was cornered by a team of gunmen near the bank where Becerra made his withdrawal yesterday.