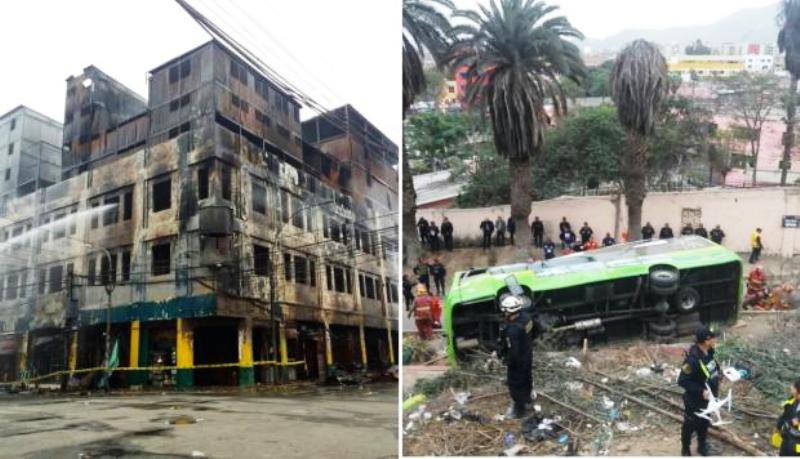 An Ipsos survey has revealed that the majority of Lima citizens believe the city government is responsible for two recent tragedies resulting in the deaths of 12 people.

Almost 90% of respondents blamed poor regulations for a fire caused by faulty containers in Las Malvinas which killed two and put more than 500 out of work. Over 58% also said authorities could have prevented a tourist bus crash killing 10 at the Cerro San Cristobal mountain which overlooks the historic city center.

“The [Municipality] of Lima has a regulatory role. In both cases there was negligence and non-performance of duties. In San Cristobal a modified bus should not have been allowed to circulate along an unsafe route, and they could have dismantled the containers in Las Malvinas through a coercive enforcement order,” said municipal adviser Julio Cesar.

Cesar added that this negative perception is not against the management of mayor Luis Castañeda, but a reasonable response to the authorities’ lack of control over these problems.

The fire erupted June 22 inside a warehouse for hardware products and spread rapidly to engulf the building due to large inventories of flammable goods. Firefighters, most of whom are volunteers in Peru, fought for two days to control the blaze and rescue 80 people trapped inside the building, two of whom died.

Einstein Vasquez, a worker at the store, was charged with reckless endangerment, aggravating a fire with eventual deceit and subsequent death after confessing to authorities that he started the fire accidentally. In his statement he said he was moving paint thinner inside a container when it caught ablaze. This is the location where the two victims perished.

The open-top tourist bus crash occurred July 10 when turning a corner at high speed on the windy mountain road which snakes up through shantytowns toward the San Cristobal peak, causing the double-decker bus to flip and roll down a hill. Ten were killed including three tourists and 56 injured.

Driver Goytzon Bravo was jailed for nine months as he faces charges of manslaughter and grievous bodily harm. The tour company Green Bus is being considered for charges under civil third party responsibility.

Peruvian economy showing signs of recovery with 2.4% growth in Q2 of 2017