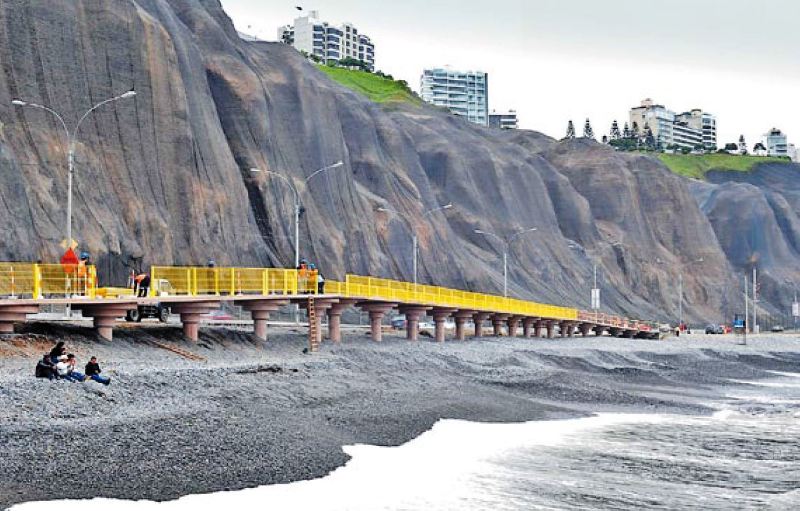 Lima mayor Luis Castañeda came under widespread criticism for several characteristics of the new boardwalk along the Costa Verde.

While the project initially enjoyed support after being announced in October, the final result has caused a scandal on social media and in the press. The three main criticisms include the width of the path, the steel fences and the use of the color yellow.

The city government’s promotional video featured an elevated boardwalk with a neutral-colored fence which did not obstruct views of the sea. However the yellow fencing which was built has a mesh weave so tight it effectively plasters the shore with yellow, which critics call an eyesore at best and political propaganda at worst.

Castañeda has been repeatedly criticized for his use of public resources to build projects bearing the branding of his National Solidarity political party. In his previous mayoralty Castañeda built bright yellow staircases to mountainside shantytowns. Earlier this year when he decided to paint over downtown murals contracted by his predecessor Susana Villaran, he had the walls painted yellow.

While his alleged political marketing with city resources never rankled the public enough to demand change, the bright yellow boardwalk in front of the green coastline, one of Lima’s most iconic images, may have finally struck a nerve.

Facebook user Luciano Canella posted a video saying the “horrible” color has made the Costa Verde uglier because it has nothing to do with the natural geography of the area.

“We don’t want to see your self-image here,” Canella said in a video which has been viewed almost 1 million times since Saturday. “This is not yours. This is everybody’s. This is not your house. Take this down please.”

In response to the criticism of the use of yellow, a city official told RPP that yellow, red and white were international colors used in public spaces. He added that the platform of the boardwalk will be painted red.

Residents also criticized the use of steel fencing, which they say is bound to rust. Critics point to the steel playgrounds and exercise equipment on the cliffs hundreds of feet above the sea which rusted in less than two years.

Others say the 10-foot width of the boardwalk is not wide enough for both a bike path and pedestrians as the city had promoted the project.

“The most frustrating thing of all is that this new boardwalk is a manifestation of how pedestrians are an afterthought in the plans for the Costa Verde,” writes urban planner Angus Laurie in El Comercio. “This project has killed the possibility of having space for an adequate boardwalk in the future and put the beach to good use.”

The 2,300-foot, elevated boardwalk was partially opened on Saturday. It will span the Punta Roquitas, La Pampilla, Waikiki and Makaha beaches when it is finished in mid-January.