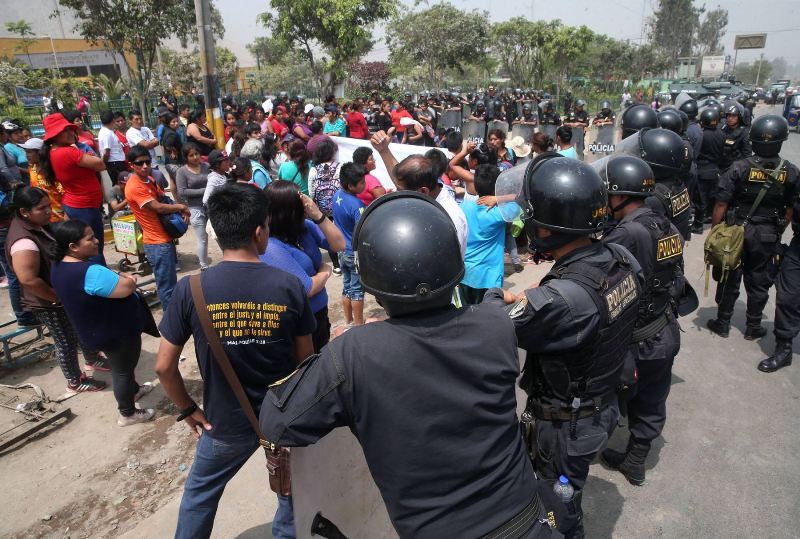 Thirty-four people were arrested in a Lima shantytown on Sunday after a violent mob attempted to lynch two pollsters following social media rumors of a child-kidnapping ring looking to harvest organs.

The unrest started in the Huaycan shantytown in Lima’s eastern district of Ate Vitarte when two pollsters were conducting a door-to-door survey. Online rumors had been circling about kidnapped children being found without organs and with thank-you cards or sums of cash near the bodies.

“From one second to the next, people started to surround us,” Luiz Nuñez, one of the pollsters, told Reuters. “They nearly lynched us and set us on fire.”

Authorities pulled the two Quantum employees from the crowd and the group descended on the police station, hurling rocks and Molotov cocktails. Police fired back with tear gas and warning shots.

One woman was killed after being struck with a bullet apparently fired by someone in the mob. Her neighbors told reporters she collected plastic for recycling and was caught in the crossfire. The riot left more than a dozen police injured as well as widespread property damage and fires.

The 34 arrested have been given nine months of preventive jailing on charges of disturbing the peace, vandalism and resisting arrest. They were kept guarded over fears of riots restarting after the trial. Relatives protested outside proclaiming their innocence.

The post circling on social media which led to the riot warned against “pishtacos,” a beast in indigenous folklore which kills innocent people for body fat. Urban legends are common in Peru’s poorer regions, and September saw an indigenous woman from a jungle community burned for witchcraft.

Local police in Ate, the Ate mayor and interior minister Carlos Basombrio have all denied the existence of a organ-trafficking gangs in Lima.

“The urban legend about organ trafficking, as recently observed in Huaycan, reveals that there are still sectors of the population that have extreme disinformation about organ transplantation,” doctor Carlos Carvello told El Peruano.

Woman burned as a witch in Peruvian rainforest, prosecutor says (The Guardian)