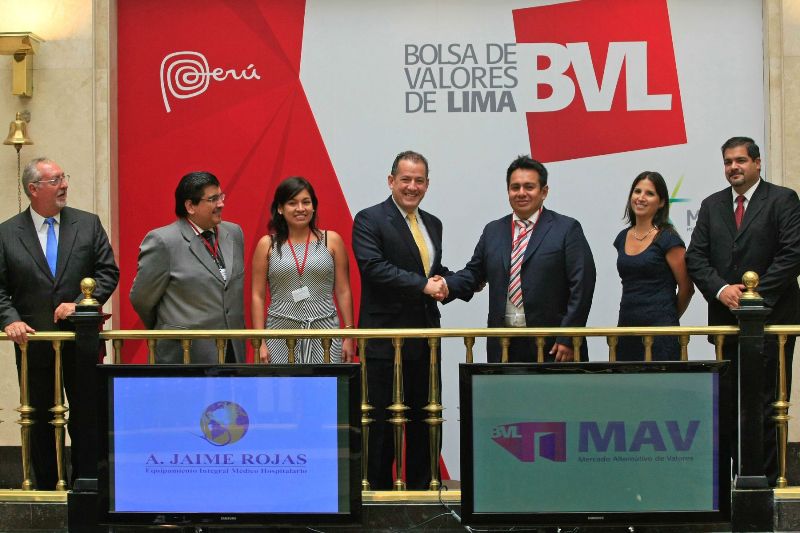 Modeled on the London stock exchange’s AIM, Lima’s alternatives market allows smaller companies to issue public debt under less stringent regulatory requirements. The Lima exchange has marketed the MAV as a second option for small and medium-sized companies to obtain financing over banks.

In 2015, companies sold debt instruments including stocks, bonds and short- and medium-term notes valued at over $22 million, up over 80% from $12 million in 2014. The market continues to grow. Last month Peruvian companies obtained over $1.5 million in financing, compared to $229,000 in January 2015.

“The MAV has become a real alternative for medium-sized companies seeking financing in the market whose benefits are related not only to cost savings, but also achieving greater prestige in the market,” Cesar Peñaranda, an official at the Lima chamber of commerce, told El Comercio.

January’s volume came from the Chavin de Huantar agriculture firm and the Ciudaris real estate developer, who issued $400,000 and $1.1 million in debt respectively.

“There are many benefits for companies that can be financed through the issue of either short-term notes or bonds,” Alberto Arispe, general manager of Kallpa Securities, told El Comercio. He added that a wider financial market will lower companies’ interest rates. “If the market and investors look favorably upon a company, they could offer to buy debt at lower interest rates than the bank … Competition is healthy.”

In 2014 the MAV saw its lowest interest rate when generic pharmaceutical firm Medrock Corporation sold  $1 million in six-month notes bearing and annualized rate of 3.4%. Another milestone came last December when commercial bank Inversiones La Cruz issued over $3 million in three-year notes to be the MAV’s largest debt issue as well as its first long-term bond.

“We are very pleased with the results … which are enabling us to reduce our financing costs significantly,” Medrock vice president Gino Michelini told El Comercio. “Financing through the bank gave us an average annual rate of 7.46% with a range between 6% and 9.5%, versus this interesting 3.4% in the last issue through the MAV.”

The Lima stock exchange inaugurated the MAV in August 2012, but the first instruments sold did not come until April 2013 when Chavin de Huantar sold $500,000 in short-term notes, the first emission in what would grow to $2 million the company raised that year.

A Lima trader told El Comercio that there is much interest in the MAV, but companies are still learning the rules and startup costs. To sell debt instruments on the MAV, Peruvian companies must have less than $57 million in sales as an average of the last three years. Their shares cannot be listed on the Lima stock exchange or anywhere else.

Promoting the MAV is part of the Lima stock exchange’s strategy in avoiding a reclassification by the MSCI index provider as a “frontier market.”