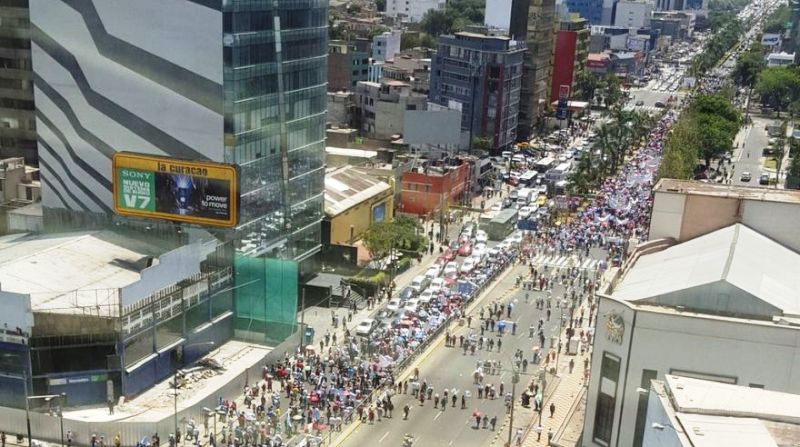 Thousands of protesters marched in Lima today against what they say is the first step in the privatization of Peru’s water companies.

Protesters marched along the entrance and exit ramps of the Via Expresa highway between downtown Lima and Miraflores until ultimately blocking traffic along Javier Prado avenue around noon. Workers chanted, “Fight against the privatization of Sedapal,” referring to Lima’s water utility, in what they dubbed the March for Water.

A leader of the water-utilities workers union told Diario Uno that a law passed last September which allows for the investment of private capital in Peru’s public utilities is unconstitutional.

“Four months from leaving [office], this government is insisting on privatizing Sedapal,” Luis Isarra told Diario Uno. “We will collect signatures among those attending the march to file a lawsuit challenging the constitutionality of the decree in question.”

Isarra added that congressional vice president Natalie Condori has presented a bill to repeal the decree.

“Nobody is talking about the sale of shares, increasing rates, massive layoffs or transferring ownership of anything. This is a myth,” housing and sanitation minister Francisco Dumler told Gestion. “The initiatives are not about general control of Sedapal. It is only on the sale and distribution of water.”

Dumler added that the protests were motivated by the labor union’s current negotiations with Sedapal over wages.

Dumler says that the $1.5 billion investment will add more than 25% more water to Lima’s supply and connect impoverished districts on the periphery of the metropolitan area to the public water network. A recent study showed that Lima residents without access to running water spend over $20 per month on water purchased from water tank trucks operated by private companies.

Meanwhile, Sedapal’s revenue is being squeezed as all of its revenue come in soles while over 60% of its expenses are paid in dollars. Profits at the company fell 56% in the first three quarters of 2015 compared to the same period in 2014.

Dumler also said that the public-private initiatives being studies would not be implemented until at least December, after a new government has taken office.

“When it’s all said and done, these projects are still being developed and are not yet valid. If the next government does not want anything to do with these initiatives, they simply do not hire the contractor.”