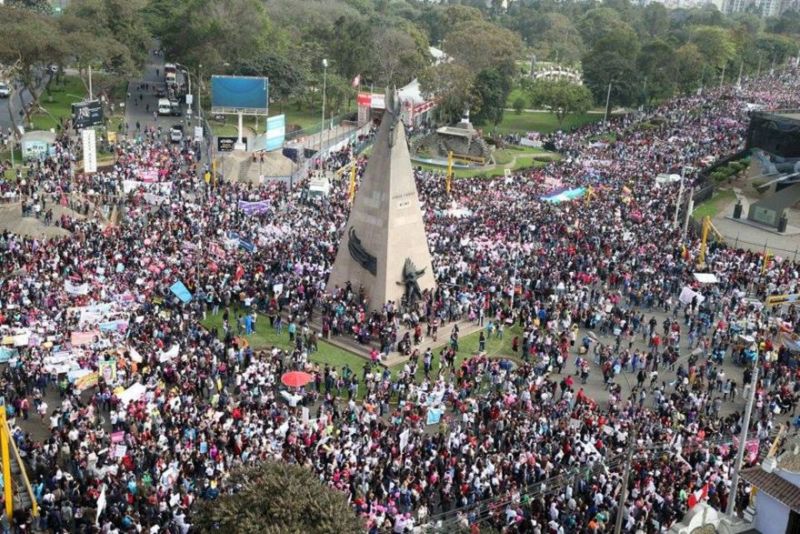 At least 50,000 people marched in the #NiUnaMenos protest against violence and abuse of women in downtown Lima on Saturday.

The rally dubbed “Not One Less” was organized after reports that 54 women have been murdered so far in 2016. The protest started on Saturday afternoon in downtown Lima’s Campo de Marte park and passed Plaza Bolognesi and Plaza San Martin before ending at the Palace of Justice.

President Pedro Pablo Kuczynski and first lady Nancy Lange attended the event  as well as actress Wendy Ramos, who has been an outspoken voice for the movement.

“We will march, we will break the silence,” said Ramos in a promotional video leading up to the event.

“We do not allow or want victims of violence,” second Vice President Mercedes Araoz told reporters. Araoz gave fiery rhetoric of standing up to ‘machismo’ in recent weeks. She said that she had been a victim of psychological abuse.

Under the slogan “if you touch one, you touch all,” the cry of songs and drums flowed down street after street, in a show of immense solidarity. Many daubed their faces with make-up bruises and bloody noses. Others donned pink and blew whistles. Children sat on shoulders waving “Ni Una Menos” flags.

There were processions of nurses and clergyman alongside men hooded in leggings pulling their beaten wives. Towering black crosses adorned with flags of other Latin American nations followed chants of “Respect.” Police and representatives from all political parties joined the march and throughout the country people gathered to demand harsher punishments for men who beat or murder women.

“It’s important we go today because inequality is terrible in Peru and too many girls I love are at risk,” one protester said.

“We will promote a culture of peace and tolerance, saying no to violence, no more violence against women and children,” event organizers and victims of domestic violence Arlette Contreras and Lady Guillen told reporters.

Interior Minister Carlos Basombrio told a group of protesters of his promises to “train police commissioners to have better protocols.”

Though brought together by a serious issue, celebration filled the air. Politicians took selfies and few failed to smile.

The fiercer chanters and placard wavers were blocked by police from entering Plaza Grau near the Palace of Justice. One large banner which read “No more sterilizations” hung from the railings outside the Palace of Justice. The songs faded at around 7 p.m. as the march dispersed. Signs were left up against walls and ribbons flickered from the railings.

There were smaller marches in Peru’s other cities including Arequipa, Trujillo, Chimbote, Cusco, Juliaca, Tacna, Andahuaylas, Abancay and Ayacucho.