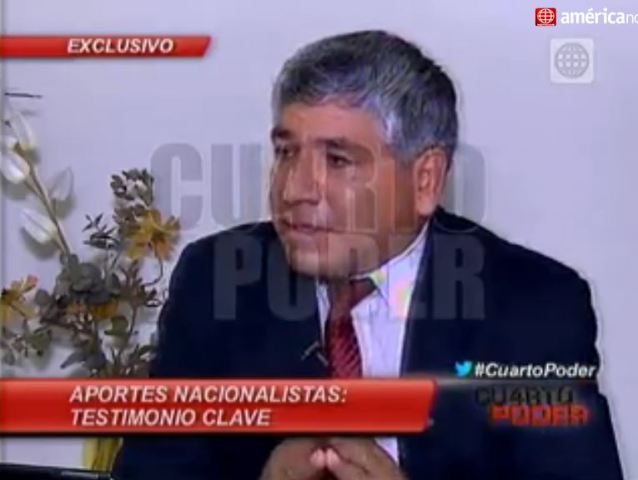 Pedro Santos, Peruvian Nationalist Party congressman from 2006 to 2011, told Cuarto Poder that his signature on legal documents submitted to the National Electoral Processes Office (ONPE) was forged. When he realized his name had been used in the official party financing procedures, he requested the documents from ONPE.

“The signature that appears there is not mine. And I have never been treasurer or accountant [for the party],” Santos said. According to the documents, Pedro Santos was the party’s accountant. He produced his DNI, Peru’s national identity card, to illustrate the difference between his signature and the one that appeared on the documents.

“This needs to be explained by the party treasurer, Ilan Heredia, not just to me but also to the Public Ministry,” Santos said. “The treasurer has to explain money received in cash, more than 11 million soles as the report says, and then explain the documents’ contents and signatures submitted to ONPE, the only one responsible is Ilan Heredia Alarcon.”

Peru’s electoral law requires that donations greater than 3500 soles ($1135) be made via bank transfer for transparency and accountability. The documents show cash donations amounting to over 11 million soles ($3.5 million), much of which came in donations greater than 3500 soles from Nationalist Party members. Included were current Justice Minister Freddy Otarola, who donated 55,000 soles ($17,830), and Labor Minister Daniel Maurate, who donated 27,900 soles ($9045).

Otarola said that the 55,000 soles he donated to the 2011 campaign were not done in one day. He said he presented one receipt reflecting the sum of daily expenditures during the duration of the campaign. “They were daily expenditures which in the end were added up, accounted for and a receipt for the final amount was issued.”

Cuarto Poder asked congressman Werner Cabrera, who is listed as having donated 166,000 soles ($53,820), if he earned enough money to make such a donation. He replied, “Ask Ilan.”

The documents were cosigned by Julio Torres, an assistant treasurer for the Nationalist Party who now works in the Government Palace as a personal assistant to the President with a monthly salary of 10,000 soles ($3240). In a letter to Cuarto Poder, Torres confirmed that the documents were not signed by former congressman Santos, but an accountant named Angel Astete.

Otarola and Torres declared that an internal investigation would be conducted by the Nationalist Party. Campaign finance irregularities are subject to investigation by the Public Ministry. ONPE has not sanctioned the party.

This latest scandal adds to the storm of political problems for President Ollanta Humala’s Nationalist Party. First Lady Nadine Heredia’s public approval is at an all-time low in the midst of her connections to other irregularities with party funds. Martin Belaunde, Humala’s 2011 campaign manager, is currently in Bolivia trying to evade extradition to Peru for his involvement in the La Centralita corruption case.