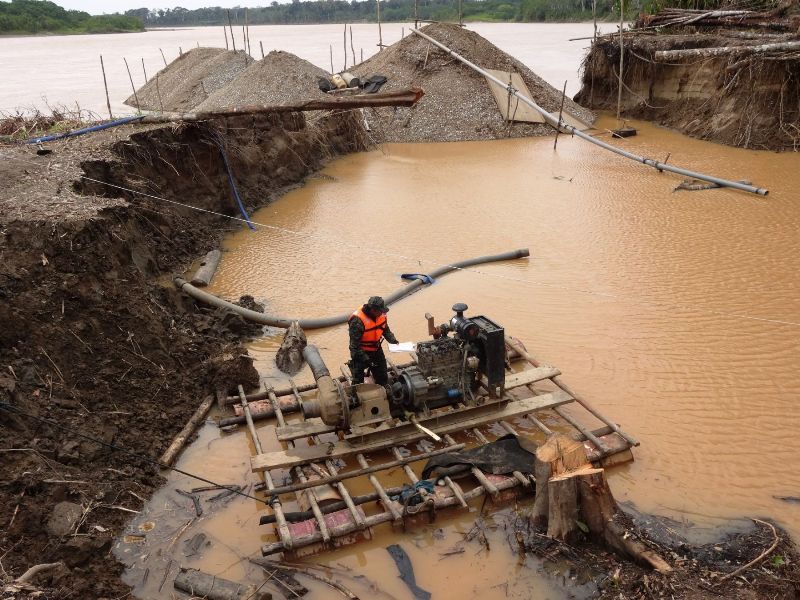 I spent a week in Madre de Dios, Peru’s southeastern state known as being ground zero for illegal mining and environmental contamination in the Amazon jungle. From what I’d heard going about the state capital, Puerto Maldonado, I did not expect booming nightlife, Harley Davidsons and what must be the country’s fattest policeman.

“You see a lot less street violence because people are paid in gold one way or another,” says Carlos, the director of a local conservation group who asked to remain anonymous. Other sources in this story also expressed concern because of common reprisals against activists and others who speak out against illegal mining.

Gold may keep petty crime down, but it allegedly creates a criminal class among authorities. Miners are faced with the difficult choice of formalizing, which provides greater security but costs tens of thousands of dollars in permits and regulation compliance. The other option is to cut costs by up to $20,000 per year and simply pay off authorities, with the risk of being raided and having equipment destroyed.

Several illegal miners told Peru Reports that police charge bribes set at fixed prices for each item used in gold mining. For example, authorities charge $0.30 per gallon of gasoline. Mercury, sieves, conveyor belts, wheelbarrows, extraction hoovers and motors each have a fixed price. In districts like San Juan Grande, police can pocket as much as $80 per day.

The miners say that authorities in Madre de Dios oppose formalization policies because the bribes are so lucrative. One miner said the bribes filter to the highest judges and politicians in the state.

Arturo had been mining legally for 20 years when authorities raided his concession in 2011 when then-President Ollanta Humala clamped down on illegal mining along the El Laberinto mining corridor. Arturo had been paying hefty annual fees of $10,000 to $15,000 for permits, studies and gold quotas.

“They came with papers saying we had to move our equipment away from the river,” recalls Arturo. “We started to move but they just bombed it anyway, saying we were operating illegally.”

After the police detonated Arturo’s machinery, he was placed on a watch list. He now has substantial debts with the equipment companies. He says many legal miners suffered the same fate in 2o11. Most have since returned illegally.

Miners can only sell gold to one government-run business in El Laberinto, which pays little. The lack of price competition leads many miners to smuggle their gold south to Puno.

Humala tried to combat illegal gold mining in Madre de Dios by regulating the sale of gasoline and other chemical inputs. Leaders in Puerto Maldonado including state governor Luis Otsuka responded with a two-week strike which paralyzed the state capital and almost ran the city out of food. The law led to a boom in black-market gasoline and drove illegal miners deeper into the forest.

“We [miners] put [Humala] in the presidency because he promised us everything. We are a huge force in this country but he betrayed us,” Arturo says.

Many mines operate clandestine so it’s impossible to estimate how many are actively extracting gold in Madre de Dios. But assuming each legal concession has 10 to 20 workers on average, some 450 illegal miners work in San Juan Grande. They mostly come from Peru’s southern state of Puno, which has a long history of artisanal mining. They bring a sister or wife to do the daily chores and stay in Madre de Dios for around three months.

The living conditions in San Juan Grande are squalid. Electricity is limited to four hours of lamplight per day. There is no running water or sewage system. The miners run a daily gauntlet of thieves who operate along the nearby waterways.

The miners brave all this to earn $750 a month, three times Peru’s minimum wage. The work includes shifting 100 wheelbarrows of topsoil a day or operating extraction hoovers. They are exposed to dangerous amounts of mercury, which they use to bind gold flecks into amalgams. With no safety equipment whatsoever, their bare skin comes into direct contact with the highly toxic metal.

In May the government declared a 60-day health emergency after samples of river water showed mercury levels three times the safety limit. The miners are the most at risk, but anybody who comes in contact with the water is exposed. A 2012 study by Stanford University showed that people in river communities which eat mostly fish had blood-mercury levels up to 27 times the limit. Mercury poisoning causes headaches, kidney problems and permanent brain damage in children.

A doctor at Puerto Maldonado’s largest hospital, Santa Rosa, showed me five archaic devices used to measure mercury levels in water. These are all the hospital has in its fight against the mercury-poisoning health emergency.

“We don’t know about mercury in people’s bodies or how to treat it because we have no way to see it. We haven’t been trained for that,” he says.

In areas such as El Laberinto, surveys have found as much as 1,200 times the mercury level deemed safe for humans. Mercury concentration increases as it passes through the food chain. Larger predatory fish are a major food source in this river city. The Stanford study showed that 60% of fish for sale in Puerto Maldonado were contaminated. The government has dismissed the study as “referential data.”

“I don’t know what’s in me,” one miner told me, pulling out a piece of hair and studying it.

Authorities license extraction categorized by lumber, minerals and oil. These licenses often create conflicts when land is occupied by indigenous communities who lack title but have lived there for generations.

I met Javier in his modest house 20 minutes outside of Puerto Maldonado. He is a native Shipibo who resorted to illegally mining gold after years of fighting for his family land in the San Jacinto community.

“We went to the police, who said they cannot do anything,” Javier said. “Everybody saw the miners making a lot of money so some people decided to start mining too.”

Javier explains that the new enterprise created divisions between a once tightknit community of 30 families.

“Some people could build three-story houses while others had nothing, so people got jealous and started hating each other.”

Javier says that after three years of mining, his community’s formerly pristine land of rivers, fruits and crops is destroyed. It’s so contaminated that nothing grows and only four families remain.

“Before we were poor but we only needed to sell some cassava and fruit in the market. People helped each other with food and everything was fine.”

Javier suffers from gout and cirrhosis, and his doctor says he probably has diabetes. Though it is impossible to determine if his condition is related to contact with mercury, he says he was completely healthy before he started mining.

When the gold reserve depleted, residents left the community. Javier says their food sources have been destroyed and now they rely on what work they can find in the city.

“It will be impossible to restore the land back to how it was. There’s no way.”

Nowhere is the battle for Peru’s Amazon more concentrated than El Laberinto, or “The Labyrinth” due to the maze of connecting rivers. To avoid being robbed, outsiders must enter before dawn to access the area characterized by ravaged soil, sparse dead trees and huge craters filled with yellow water loaded with mercury. Chugging extraction motors can be heard all day long.

Arturo, the miner who was wrongfully raided, says that communities feel a sense of uncertainty over President Pedro Pablo Kuczynski. They hope for lower costs and barriers to operate legally. They argue the state will then be better able to address the mercury problem, as well as tackle corruption and improve security in Madre de Dios, which has Peru’s highest crime rate.

Environmental nonprofit organizations have contacted artisan and local miners and even given them equipment to mine gold without using mercury.

“They came with this machine and took a lot of photos, and just left,” Carlos, another miner, says. “It worked for a while, but then it broke down and nobody knew how to repair it. The replacement parts were really expensive so everybody just went back to doing it the way they did before.”

Carlos says that the miners of Madre de Dios see NGOs as motivated by money from donations, and that they need to work with local people instead of for their stakeholders.

“It’s always gringos who think they understand the ways you can fix it. Where are the people who live there? Where are the Peruvians?”

Grassroots leader’s murder in Peru is a signal to opponents of mining, son says (Mongabay)