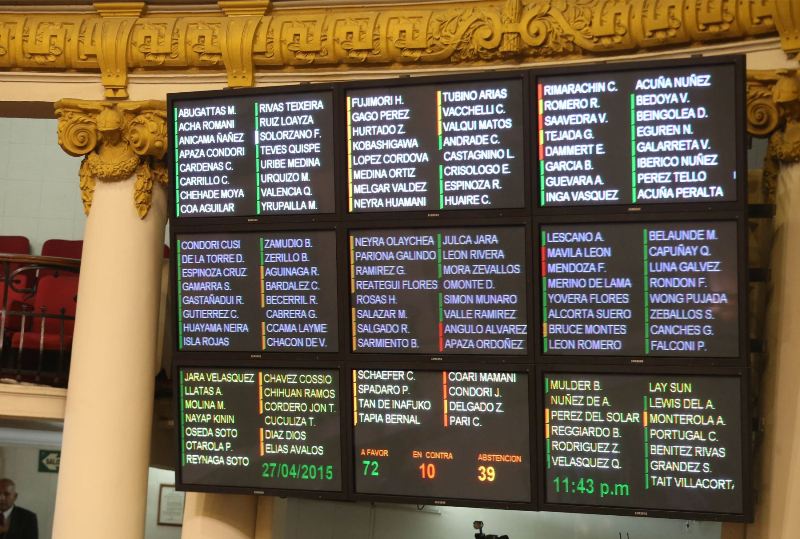 Prime minister Pedro Cateriano was approved by congress late last night in a key confidence vote which, if unsuccessful, would have allowed President Ollanta Humala to dissolve congress.

Cateriano received 73 votes in favor, 10 against and 39 abstentions after 12 hours of debate. Cateriano is the seventh prime minister during Humala’s turbulent presidential term which ends next year.

Cateriano met with opposition leaders in the weeks before last night’s vote to establish support. A no confidence vote could have prompted fresh parliamentary elections widely seen as risky in a shaky economic year when foreign investment is crucial. The fujimorista bloc headed by leading presidential candidate Keiko Fujimori represented most of the abstentions.

Much of the debate was based on Cateriano’s request for legislative powers to combat crime and corruption. But when the issue appeared to jeopardize the confidence of the APRA and fujimorismo blocs, Cateriano conceded the issue until a later date.

In a 70-minute speech before the vote, Cateriano touched on a number of issues facing the country. He committed to continue dialogue with different political factions. He promised to make “all possible efforts” to inspire confidence in the international investment community and reiterated the importance of the Tia Maria copper mine, which has been stalled by an increasingly violent indefinite protest by local farmers. He underscored the importance of combating crime and corruption, two issues increasingly a concern for Peruvians.