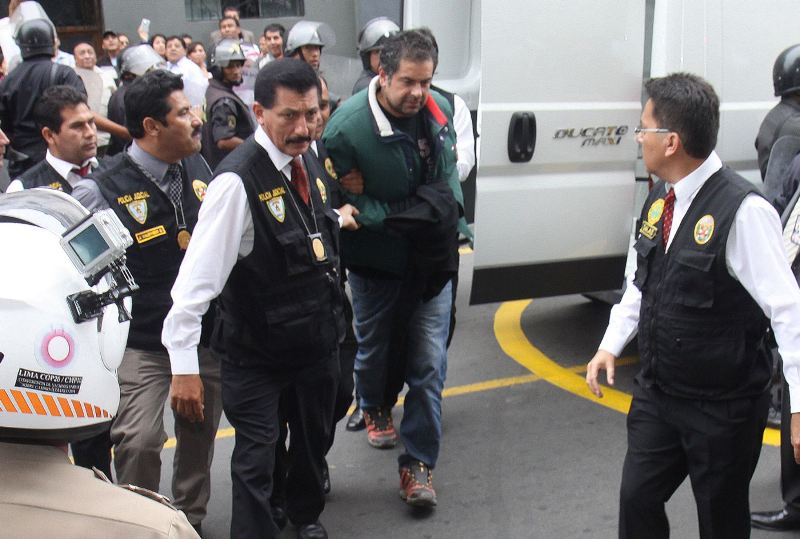 After Bolivia extradited Martin Belaunde to Peru on Friday, the Peruvian fugitive facing embezzlement and money laundering charges was transferred to a Lima prison.

Belaunde was arrested Thursday in Bolivia’s Beni state near the Brazilian border. Early Friday morning he was personally delivered by Bolivian President Evo Morales to Peruvian interior minister Jose Luis Perez on the border of the two countries in Desaguadero. From the bridge overlooking the Desaguadero river, the heavily guarded, bulletproof vest-donning Belaunde was brought to the Peruvian immigration office to document his entrance back into the country. Authorities then took him to the local soccer stadium, where a military helicopter awaited. The helicopter flew Belaunde to Lima, where he was transferred to the Piedras Gordas I penitentiary.

Belaunde told Peruvian media by phone that he had not escaped from the La Paz home where he was serving house arrest, but that he had been kidnapped. After his capture, however, he told Bolivian authorities that he paid $5,000 to third-parties to arrange his escape. Belaunde’s escape last week prompted Evo Morales to sack both his interior minister and police chief.

In Lima, Belaunde began an 18-month sentence of preventive detention. He is being held in an individual cell with no contact with other inmates. A congressional investigation known as the Belaunde Commission will question him in prison about public works contracts he obtained for clients.

Belaunde escaped to Bolivia last December after months on the run as a fugitive in Peru. He was denied political asylum and, after escaping house arrest in Bolivia, re-captured before being extradited.