Medicinal marijuana one step away from legalization

Yesterday the Healthcare Commission of the Peruvian Congress approved a bill that would make medicinal marijuana legal in the country.

Eight votes in favor and one against led the bill to pass; two members of the commission abstained. In September, the Defense Commission of Congress also gave a green light to the bill, which is now being submitted for consideration on the floor of Congress – it’s the last step toward legalization.

If approved in the floor of Congress, the 982/2016-PE bill would make the use, production, import, research and commercialization of the plant and its derivatives – such as cannabis oil – completely legal for medical purposes. Small-scale cultivation for personal use will not be legal yet, but regulated domestic production could begin in as little as two years’ time.

Congressman Alberto de Belaúnde, the bill authors said, “I am confident we will win the majority of the votes. Making sure scientific research and human testimonies reach all congresspeople, a sure formula to dismantle preconceptions and eliminate fears,” reported W Radio.

Supporters for cannabis legalization include President Pedro Kuczynski, who has told the media that “smoking a joint is not the end of the world, even if many disagree.” This reiterated his liberal views on moderate cannabis consumption, and the of condemning legalization of harder drugs.

Congressman Bienvenido Rodriguez is the main opponent of the would-be law. He expressed his views during a session with the Healthcare Commission, stating that “given the lack of assurances for the enforcement of this bill, we are essentially opening our doors for drug trafficking.” While a nephrologist himself, the congressman has a history of controversial statements. “Alzheimer’s disease occurs in individuals who read and have studied a lot, like professors,” he once said. 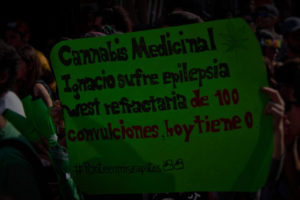 Seen at a pro-legalization demonstration in Peru: “Ignacio has refractory epilepsy due to West’s syndrome. With medicinal marijuana, his convulsions went from 100 to 0. Hashtag: Put yourself in my shoes.”

Congressman Belaúnde drafted and presented the bill in February, shortly after the police raided a laboratory run by the Buscando Esperanza (Searching for Hope) family collective.

The 80 families involved in the collective used the substance exclusively as medication for their loved ones with epilepsy, cancer, Parkinson’s, multiple sclerosis and other difficult diseases.

One of its members, Roxana Tasayco, condensed the defiant sentiment of the group: “It’s not going to cure [my mother] but it’ll give her a better quality of life in her last days. If I have to break a few laws to do that for her I will,” she told Reuters.

The humanitarian reasons behind the push for medical marijuana regulation allows patients with difficult conditions to access the controlled substance with ease. In the U.S., for example, patients can get their marijuana cards without leaving their home through services like PrestoDoctor.

The North American country has seen medical marijuana turn into a major crop with a $7.1 billion market and 25% annual growth rate, with taxation of the substance and new business opportunities created around the new market benefiting the economy.