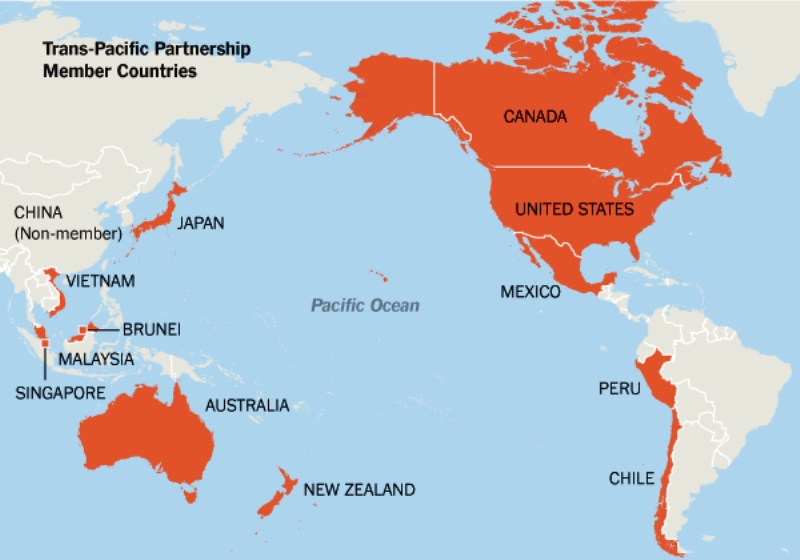 Peru and 11 other countries including the United States, Japan and Chile have agreed on the Trans-Pacific Partnership, the largest free-trade deal in history.

The Trans-Pacific Partnership (TPP) looks to eliminate tariffs, quotas and bureaucratic red tape in each of the member countries over different timeframes. While some tariffs won’t be phased out for as many as 30 years, leaders touted the agreement will eliminate thousands of import taxes and other protectionist measures.

The 12 countries with a population of 800 million people represent almost 40% of the world’s GDP. While Peru already enjoys free trade agreements with many of the member states, the deal opens up five key markets for Peru: Australia, New Zealand, Vietnam, Malaysia and Brunei. Peru’s most competitive exports for these markets include canned fish, grapes, textiles and asparagus.

“There are many possibilities for this TPP to generate more jobs and investment,” said Martin Perez, president of Peru’s largest trade group CONFIEP. “Without a doubt we will export more to Australia, New Zealand, Malaysia, Brunei. We barely export $36 million currently.”

However agreeing to a deal is only the first step, albeit an important one after eight years of difficult negotiations. Now the member countries must each individually ratify the agreement in their legislative bodies. The agreement takes effect when a minimum number of members’ parliaments have approved the deal.

Winning congressional approval will prove difficult in some countries, especially the United States in an election year. Some of the more contentious issues included opening dairy markets, the duration of pharmaceutical patents, the elimination of tariffs on autos and more.

Peru played a central role in arguing for a shorter period of monopoly for pharmaceutical companies which develop “biologic” medicines. The United States pushed for 12 years of exclusive rights for the companies which develop new drugs, while Peru appears to have won the debate in the deal’s requirement of a mandatory minimum of five years.

“We think we have a balanced result,” said commerce and tourism minister Magali Silva, who represented Peru in the last week of negotiations in Atlanta.

A curious absence from the list is Colombia, Peru’s neighbor and fellow member in the Pacific Alliance. Analysts say that the TPP members were skeptical to admit countries who were not members of the Asia-Pacific Economic Cooperation (APEC), in which Colombia is an observer and has been trying to join since 1995.

The United States could easily push for Colombia’s admittance into the TPP, according to Carl Meacham of the Center for Strategic and International Studies (CSIS), but President Barack Obama opted to finish the contentious negotiations first.

The TPP is not only the largest free-trade agreement in the history of the world, it is also a way for the United States to assert its presence in Asia and global trade. Observers say the deal puts the U.S. in an authoritative position for future trade deals involving China and the European Union.

“When more than 95% of our potential customers live outside our borders, we can’t let countries like China write the rules of the global economy,” President Barack Obama said. “We should write those rules, opening new markets to American products while setting high standards for protecting workers and preserving the environment.”

Why is Colombia not in the Trans-Pacific Partnership? (CSIS)