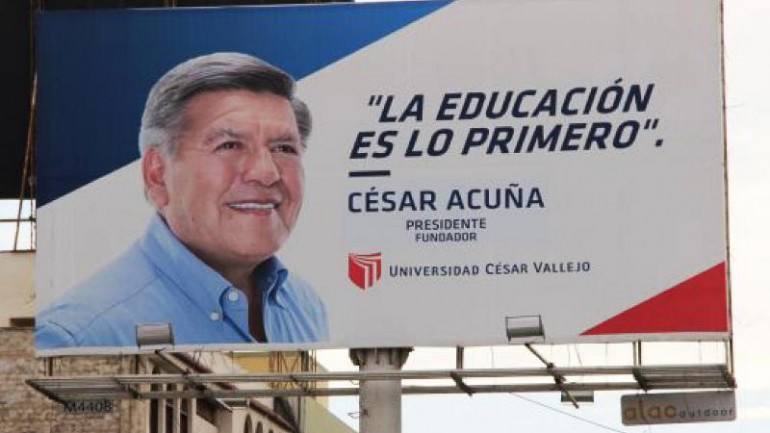 Peru’s special elections board JEE announced last month that it would investigate three use of billboard advertisements for three universities owned by Acuña which incorporate his face next to the words, “Education is first” and “President.”

Today the JEE confirmed that the advertisements did violate campaign finance laws. While the JEE can demand that the universities withdraw all advertising featuring the candidate, it has no authority to sanction Acuña.

“There was an electoral infraction committed by Acuña for the use of university funds and educational establishments,” Manuel Miranda, president of Peru’s electoral authority in Lima, told Canal N. “We have determined that it is subliminal political advertising for the candidate in his capacity as founding president of that university.”

Miranda added that the JEE would send a letter to Cesar Vallejo University requesting that all advertising featuring Acuña’s face be withdrawn. The JEE would also send letters to Peru’s tax authority, SUNAT, and the university regulator, SUNEDU, requesting each organization investigate the tax-exempt university’s use of resources.

Cesar Acuña is the founder and owner of Cesar Vallejo University, one of the country’s largest with 11 campuses throughout Lima and northern Peru, as well as the Autonoma del Peru and Señor de Sipan universities.

Acuña recently tied Pedro Pablo Kuczynski for second place in opinion polls after several months which saw him spend more on advertising than the entire field of candidates combined without including the university advertising expenditures.

The JEE’s order to pull the university ads featuring the candidate is the third setback in a difficult week for Acuña.

On Sunday night he said in a television interview that the government should fix food and utility prices as well as the exchange rate, prompting a barrage of criticism from economists and journalists who recounted the 1980s when Peruvian consumers waited in long lines for basic staples and businesses negotiated complex currency exchange regimes similar to those in Venezuela and Cuba.

On Tuesday Acuña made international news for allegedly plagiarizing various sources for his doctoral thesis in 2009. The Complutense University of Madrid may revoke Acuña’s degree pending an investigation. Losing his PhD for cheating would not only be an embarrassment for the self-styled candidate for education, but could disqualify him from the 2016 election.

An official for the JNE electoral authority said that if Acuña did not possess a doctorate from the Complutense University of Madrid as stated in the official resume he submitted to the board, he could be removed from the ballot for misrepresentation.