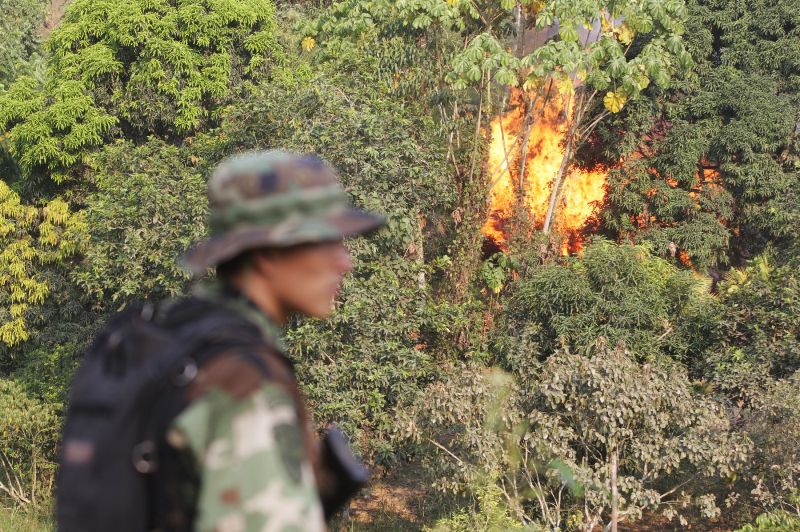 An annual UN report on coca production indicates that Peru has reduced its national production by at least 6% in 2015.

The United Nations Office on Drugs and Crime (UNODC) report on Peru’s coca production says 40,300 hectares were dedicated to coca in 2015, down from 42,900 in 2014. Peru’s government cited its eradication efforts in driving the 6.1% decrease in production.

UNODC spokesman Kristian Holge said at a press conference that between 2011 and 2015 Peru saw a 35% fall in coca production from 62,500 hectares to just 40,300, according to the most recent data. Holge called the reduction a “national and regional achievement.”

Peru’s national drug commission, Devida, reports that the government has cleared 14,000 hectares so far in 2016. The national goal, which will be carried on by the incoming government of President-elect Pedro Pablo Kuczynksi, is to reach 30,000 hectares by 2017.

“The number of hectares eradicated last year was a big blow to the supply, and above all it shows that our model works,” Dediva president Alberto Otarola told Andina.

Otarola also stressed the importance of replacing coca with alternative crops such as coffee, cocoa and pineapple. He added that his agency provides technical assistance in each stage of development, including planting, production, harvest and post-harvest.

According to Otarola, Devida has assists in the production of 58,000 hectares of alternative crops per year, which benefit 53,000 families. The agency built 1,200 miles of rural roads to allow producers easier access to regional and national markets. Finally, Devida helped grant land titles to 70,000 farmers and their families between 2011 and 2016.

The report showed that, while overall production in Peru was down, hectares in the top producing regions such as the VRAEM were virtually unchanged. These regions are designated as traditional-use and not subject to eradication efforts. Of Peru’s 13 states which product coca, Cusco and Ayacucho dedicate more than 16,500 and 10,300 hectares respectively for a combined 65% of Peru’s total production.

Meanwhile, the yield per hectare of coca crops as well as the average price for the leaf, cocaine and its derivatives also fell slightly. The UNODC report cited “anecdotal evidence” from Peru law enforcement that a new law authorizing the air force to shoot down drug planes may also contribute to the reduction in coca.

The report highlighted a slight increase of coca crops in Peru’s national parks and buffer zones.

Peru led the world in coca production in 2012 and 2013. However a production surge led Colombia to surpass Peru as the world’s leading producer in 2014. Last year Colombia saw a 39% spike, possibly due to that government’s ceasefire with FARC rebels, to over 90,000 hectares. In 2015 Colombia produced more coca than Peru and Bolivia combined.