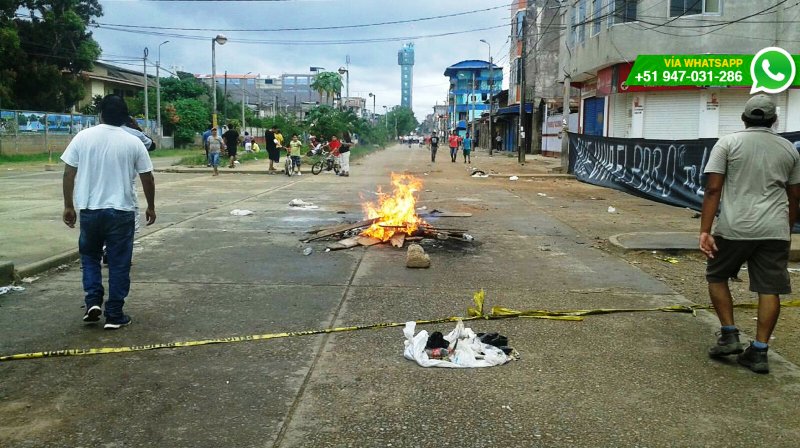 Peru’s central government has called for talks after an indefinite regional strike in Madre de Dios has halted commerce and repelled tourism.

Officials from President Ollanta Humala’s government have scheduled talks with regional leaders to end an indefinite strike which began last Monday in the Madre de Dios state and has spread to Ucayali. Protesters are demanding the repeal of laws which are aimed at reducing illegal mining and logging.

“If the authorities of the central government continue in their stubbornness, the Interregional Amazon Council will join the strike, which will include Loreto, San Martin, Amazonas and Ucayali,” said protest leader Vidal Salazar.

Protesters set fires and marched to block the streets of provincial capital Puerto Maldonado, including the Interoceanic Highway which has prevented people and cargo from entering or leaving the city. The bus terminal is indefinitely closed and work has stopped on infrastructure projects. Stores, banks, schools and government offices are closed.

Stranded tourists to the popular ecotourism destination pass the time waiting for their flights out of town. One hotel manager told El Comercio that he cancels 50 tourist packages every day. He estimated that the region loses $550,000 from tourism every day during the strike.

The more controversial law limits the amount of gasoline, a key input for mining gold, a person can buy in the region. In order to purchase 200 gallons of gasoline, the law requires a purchaser to register his business with Sunat, Peru’s tax authority, and declare identifying information about his car or boat and state the purpose of the business.

On Thursday the government increased the limit for unregistered businesses from five gallons per day to 10. However protesters continue to demand the repeal of the limits as well as a law which establishes stiff jail penalties for illegal loggers.

However government officials have rejected the possibility of repealing the laws as protesters demand.

“We are open to dialogue, but we cannot repeal the laws that empower the fight against illegal mining and logging, activities which lead to death,” said environment minister Manuel Pulgar. “If these laws are repealed, God knows who will save Madre de Dios. Illegal mining will continue to grow and state controls are needed. Demanding their repeal reveals a level of irrationality.”

“What they want is absolute freedom to engage in illegal activities, and we cannot allow that,” Pulgar added. “The destruction of the Amazon, the diseases caused by mercury, labor rights issues and child sexual exploitation are scourges that the residents of Madre de Dios do not deserve.”