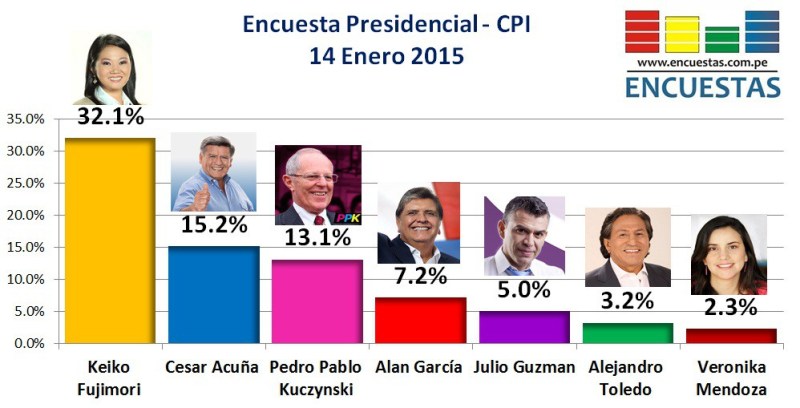 A CPI poll taken from Saturday through Tuesday showed the former La Libertad governor and Trujillo mayor Cesar Acuña in second place with 15.2% of the vote, compared to 13.1% for Kuczynski.

Acuña’s lead according to CPI is less than the survey’s 2.5% margin of error. A Datum poll released the next day showed Kuczynski with a four-point lead over Acuña, suggesting a statistical tie since last month.

Acuña’s rise comes after a report from Peru’s electoral authority ONPE showing that the multimillionaire owner of Cesar Vallejo University had outspent all of the other candidates combined. Acuña’s campaign has spent over $1.1 million to date, compared to the next highest expenditure of $149,000 from Kuczynski.

The official ad spend from Acuña’s Alliance for Progress party does not include Cesar Vallejo University advertising in which the university founder figures prominently with the word, “President.” The university ads have prompted investigations by Peru’s tax and campaign finance authorities.

In the same survey which saw the third-ranked candidate displace the second, 45-year-old economist Julio Guzman emerged in the top five presidential candidates for the first time by displacing former President Alejandro Toledo. Guzman garnered 5% of voter intentions while Toledo fell to 3.2%.

“The purple wave keeps growing, and we have buried our first dinosaur,” Guzman wrote on Twitter in reference to the color of his Everybody for Peru political party and his surpassing of the 69-year-old former president.

Guzman rose four percentage points in just one month to surpass both liberal candidate Veronika Mendoza and Toledo to shock the field of candidates and Peruvian politics. The newcomer with degrees from Georgetown and Oxford has branded himself as a political outsider advocating for orthodox economic policy in a field of center-right candidates with extensive political baggage.

Two-time former President Alan Garcia fell one percentage point to 7.2% despite forming an alliance with his former right-wing nemesis Lourdes Flores and the Popular Christian Party.

Leading presidential candidate Keiko Fujimori has the support of 32.1% of voters according to the poll, a level she has maintained for more than a year. Analysts believe Fujimori is preparing for a runoff vote, which the survey showed her winning in hypothetical races against Acuña and Kuczynski by 14 and 15 percentage points respectively.