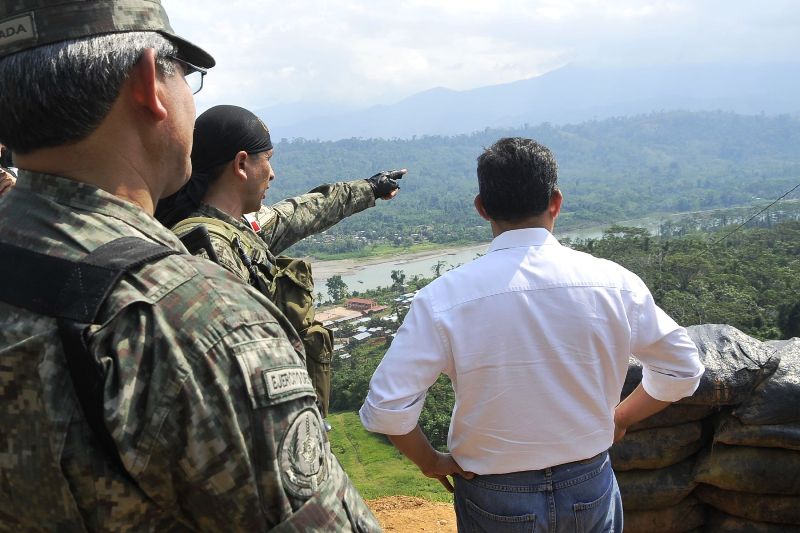 Humala said there was “light at the end of the tunnel” for Peru’s top coca-producing region after security forces’ recent victories over the Shining Path, which include the killing of  “Comrade Antonio” last week, the capture of two leaders last month and the dismantling of two forced-labor “production camps.”

“Evidently [Antonio] is the main military leader who had remained in all of the VRAEM after the elimination of Alipio and Gabriel,” Humala said. “This is a successful policy which now lets us see the light at the end of the tunnel in the VRAEM.”

Humala’s government has focused on destroying clandestine airstrips used to transport the drug in and out as well as convincing impoverished farmers to switch coca for other crops. He pointed out that 3,700 acres of coca were switched for coffee, chocolate and pineapple during his term.

Humala said the security gains made in the VRAEM have allowed the government to build key infrastructure projects including new highways and bridges. At the start of his government, 70% of his eradication budget for the VRAEM was used for security purposes and the rest for development. Today, he said, that ratio has reversed.

Humala also mentioned the pacification of the Alto Huallaga river valley after Comrade Artemio was captured in 2012. Today the region produces chocolate and pineapple among other agricultural substitutes.

Humala’s comments came one day after over 6,000 people participated in a regional demonstration against crime in provinces of Cusco and Ayacucho.

“Here the police and security do their job responsibly,” said local mayor Alfredo Yucra. “But we still need for everybody to come together tomorrow to tell organized gangs who want to come into this city, ‘Stop!’ There is no place for crime here, only for peace and development in the VRAEM.”

However the government’s eradication strategy is not without critics. A story by the Associated Press last month highlighted the difficulty coca farmers have in supporting their families on less profitable crops.

“[Coca] is what we live off,” said the mother of a family of seven. The family tried to switch to bananas but earned only $1 in a harvest that would otherwise pay $1,000. “They give you a machete and a few cacao seeds and then they forget about you.”

A recent United Nations report showed that a 14% drop in cocaine production left Colombia as the world’s top producer, after two years of Peru holding the position. However production in the VRAEM was virtually unchanged.

Last month Peru approved a controversial law which would allow the national air force to shoot down planes suspected of carrying drugs.

In May the United States designated the Shining Path a “narcotic kingpin,” which makes it a crime for any American citizen to do any kind of business with anybody affiliated with the organization.