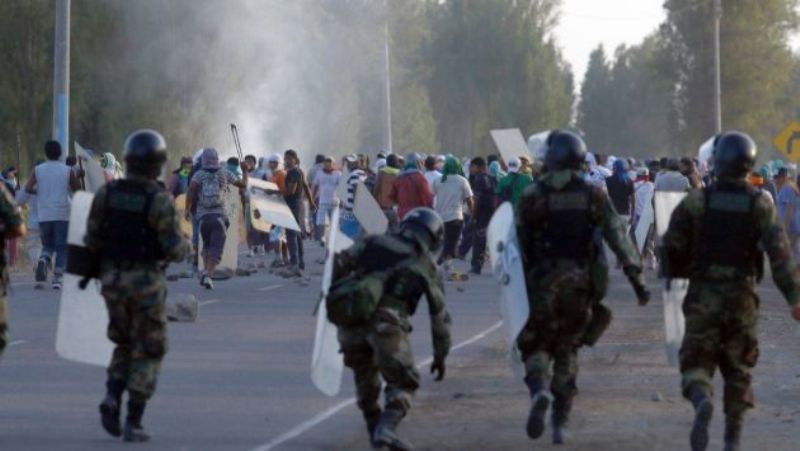 A protester against the Tia Maria copper mine in Islay province of Arequipa department was killed during violent unrest in the port city of Mollendo last night.

In a 72-hour strike in Mollendo, the closest city to the Tambo valley where the $1.4 billion copper mine is planned, protesters burning tires to block the city’s main road next to a large market. In clashes with police, one protester was killed and two more injured. An autopsy will determine the cause of death.

Interior minister Jose Luis Perez told RPP that protesters launched “fierce” attacks on police late into Monday night. “Unfortunately we were told early this morning that one was killed and an investigation is currently under way as to the cause of death as well as two more who were injured,” Perez said. “We regret this death and the two injuries, but I want to make something clear. My support is with the national police who come into this conflict with 120 injured.”

The latest violence comes just one day after the interior minister said on national television that order had been restored in the Tambo valley. On Sunday over 1,000 police descended on the towns of Cocachacra, Dean Valdivia and La Punta de Bombon to clear the streets. In each district, protesters threw rocks and injured at least 15 police officers during the operation. In Dean Valdivia, protesters hit a helicopter in flight with a rock that left a six-inch hole in the cockpit, prompting its return to base and rendering it unsafe after only an hour on the scene. The national police director announced the deployment of one thousand more police to the Tambo valley.

The interior minister mentioned the “The Spartans” subgroup in addressing the atmosphere of violence in Islay. He alleged they are not from the Arequipa department and denounced intimidation aimed at residents who do not support the strike.

The Arequipa police chief told La Republica that the Spartans try to create chaos. “They use wooden shields and launch rocks from slings when they face police.” He added that the police will use the necessary force to protect themselves.

Prime minister Pedro Cateriano committed to resuming talks only after the strike and violence end. “We are going to have dialogue without violence, under no threat of any kind.”

The opposition has announced a three-day strike in the city of Arequipa for next Tuesday, Wednesday and Thursday.

Southern Copper has postponed the start date for production until the end of 2017 or early 2018. A subsidiary of Grupo Mexico, Southern Copper produced 680,000 tons of copper in 2013, of which 339,000 were mined from its Toquepala and Cuajone mines in southern Peru.