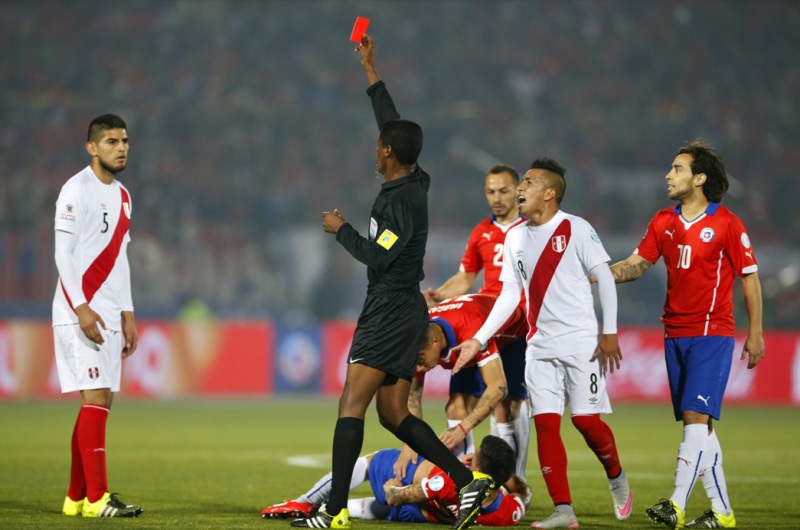 Chile defeated Peru 2-1 in the Copa America semifinals match last night to advance to the championship against the winner between Argentina and Paraguay.

Last night’s game was another controversial win for Chile as Peruvian defender Carlos Zambrano was issued a red card after just 20 minutes of play.

Zambrano was booked for a yellow card when he blocked the path of a Chilean offender trying to get a ball from going out of bounds. At 21 minutes, in a play to be debated throughout the annals of Peruvian soccer history, Zambrano’s foot hung in the air a moment too long after clearing the ball from the defensive zone and grazed Charles Aranguiz, who fell to the pitch writhing in agony. Zambrano was issued a red card and booted from the game.

Farfan hit the post with a header from a Guerrero pass after Zambrano left the field. But later a Chilean pass got behind Peru’s defense and Eduardo Vargas tapped it in from close range.

After the half, Luis Advincula fed a cross for Andre Carrillo in front of the goal which Chilean defender Gary Medel reached out and inadvertently scored an own goal to tie the game 1-1.

Tension remained high as Peru kept up a relentless attack when Eduardo Vargas struck a knuckling shot from outside the penalty area into the upper corner of the goal past Peruvian goalie Pedro Gallese.

The Chileans beat the Peruvian squad 2-1.

Defensive star Carlos Zambrano quickly took to Instagram to preempt the criticism for receiving a red card so early in such a close game. “Of course I’m the bad guy! Just as much as it hurts you, imagine how I am! I’m the first to admit I screwed the country, my country … But that’s soccer and just the same our team with 10 men fought and left it all on the field.”

The questionable circumstances in which Zambrano received a yellow card at seven minutes shortly followed by the red at 20 will surely feed anti-Chilean sentiment among Peruvian soccer fans. Chile will play in their first Copa America final since 1987, which it lost to Uruguay.

Disqualified from the Copa America finals, Peru will play the loser of Wednesday night’s game between Argentina and Paraguay for third place in the tournament.

Watch highlights from the game, including Zambrano’s penalties, below.