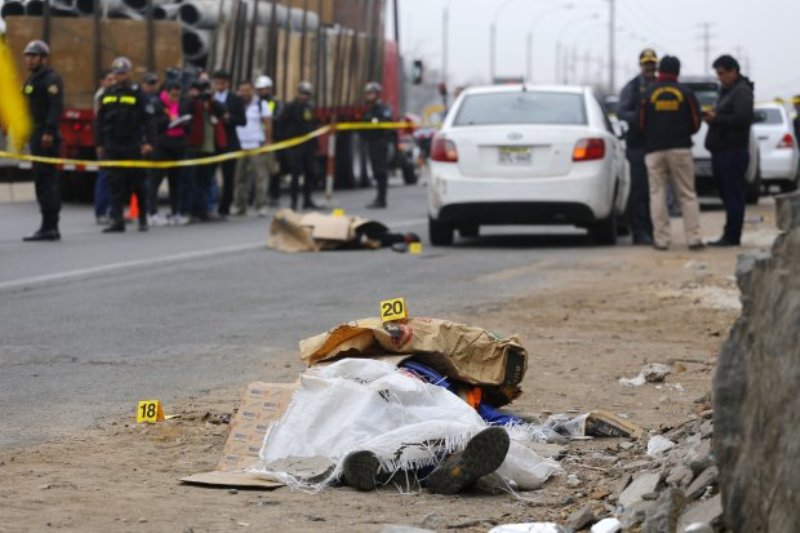 Prosecutors in Peru are investigating dozens of police officers for planning extrajudicial killings in the shooting deaths of at least 27 suspects.

La Republica and Cuarto Poder have reported on an investigation dating back more than a year into an alleged “death squad” of police who murdered criminals to earn promotions and win recognition. Prosecutors are investigating 96 total officers, including 10 senior officers, who they believe planned the extrajudicial killings of 27 men with criminal records in Lima, Ica and Lambayeque.

The investigations focus on Raul Enrique Prado, the commander of a special unit in the police force’s intelligence agency, Dirin. According to the reports, Prado paid confidential informants to convince underworld figures to plan and commit armed robberies and kidnappings. The informants would then pass the information to Prado, who would ambush the unwitting criminals in a hail of gunfire.

“Commander Prado set it all up, and that’s how he earned his promotions and congratulations from his bosses,” one anonymous informant told Cuarto Poder. “We were making money. They got us to deliver people with records who would do the jobs. In other words, to make criminals believe that there were businessmen or banks to rob.”

The informant said he was one of at least 10 others who earned $150 to $240 for each time they could “motivate” gangs and smalltime crooks to commit crimes, and then provide Prado with the place and time.

Prado’s lawyer has denied his client planned any of the killings being investigated. He called the allegations “absurd” and “false,” and suggested the anonymous informant gave his interview to Cuarto Poder for money.

Investigators are focusing on four specific cases, two of which are set in Lima and two more in Ica’s Chincha province and Chiclayo. The cases feature many of the same suspicious circumstances.

No police officers were injured in firefights which saw all suspects killed. Most of the dead men’s bullet wounds showed a downward trajectory or entered through the back. Finally, Prado was involved in each assault without giving prior notice to local authorities.

In 2012, a team of SUAT military-tactics officers killed a gang of four which included three police officers in a shootout in Lima’s Puente Piedra district. The official version at the time stated that police foiled the gang’s plot to kidnap a local businessman, who was not in Lima at the time of the assault.

In a similar case in December 2013, police killed six men in Chiclayo at a pastry factory of a well-known entrepreneur. The police said the men were planning to kidnap Manuel Coronel, known as the “King Kong King,” for the iconic desserts of the region.

In September 2014, a police unit killed four suspects in the Chincha province who had just kidnapped a businessman in the nearby city of Cañete. None of the men killed had gunpowder on their hands or wrists, indicating they had not fired their weapons.

The case which likely attracted scrutiny from investigators came in June 2015 when police accidentally shot a man while he was sleeping in his taxi in Lima’s El Agustino district. Luis Laos, who also worked as a kite vendor, was resting in the early morning when a bullet came through his windshield and struck him in the chest.

Laos said that another officer who he knew from the area then approached the front of the car. He heard various police officers arguing that they had to kill him. They fired several more shots from in front of the car as Laos covered up with his arms. He was hit with two more bullets in the shoulder and arm. Another officer pulled him from his car and threw him on the ground when Laos’s brother arrived.

“They shot at me. They shot to kill … There are eight bullet holes in my windshield,” the man told Cuarto Poder. “If [my brother had not arrived], they would have killed me.”

A short distance away from Laos’s car, police killed five men who they said were en route to rob a nearby gas station. The official report stated the unit was acting on inside intelligence when they confused Laos for another member of the gang.

“I’m horrified,” interior minister Carlos Basombrio told Cuarto Poder. “This cannot be taken lightly. We are looking at extremely serious charges. Never in the history of the police has a report of this nature occurred, even in the worst times of terrorism.”

Basombrio added that his department would issue a detailed report on the alleged conspiracy in 10 days.

The story went public just as President Pedro Pablo Kuczynski took office on July 28. Kuczynski and Basombrio have made rooting out corruption in Peru’s police force a central theme in battling rising crime and corruption.

Two police officers involved in the December kidnapping of an Ucayali businessman in Lima were sentenced to 30 years in prison on Monday.