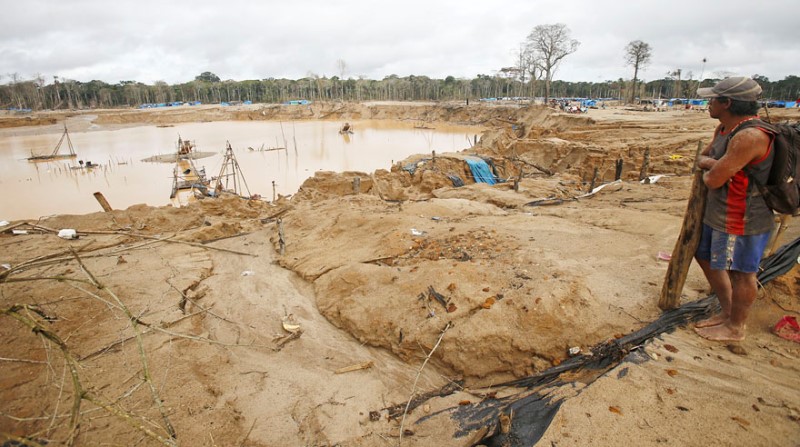 Peru’s government has spent millions of dollars on raids of illegal miners as the industry has continued its advance into protected areas of the Amazon jungle.

The government’s strategy revolves around raids on illegal mining camps as well as convincing informal miners to register their businesses. Authorities conducted 62 raids in 2015 and five so far in 2016.

The government uses helicopters and thousands of police officers and military to conduct each raid on illegal mining towns which sometimes have transitory populations numbering in the thousands.  Agents blow up the miners’ equipment and chemical inputs, but miners are seldom arrested. Each raid costs the government $300,000.

Peru’s government has spent over $20 million in its fight against illegal mining operations since 2015. In addition to the government expenditure, the raids have cost the country tens of millions of dollars in heavy machinery. Police destroyed an estimated $14 million in equipment just in the five raids of 2016.

Just in Madre de Dios, the heart of illegal mining in Peru, more than 150 square miles of rainforest were destroyed between 2001 and 2014. And the rate of deforestation has more than doubled from around nine square miles per year before 2009 to 19 square miles lost per year since 2010.

The miners often set up again within weeks after a raid. One official involved in raids in Madre de Dios told Peru Reports that illegal gold mining is too profitable.

“Two weeks after we clear them out, they set up in the same place or maybe somewhere else,” the official said. “There is too much gold in the ground and it’s not too difficult to get it out. They make too much money.”

Meanwhile, the illegal miners continue to advance toward Peru’s protected parks. A recent story by El Comercio reported that some 2,000 miners were operating inside the Tambopata reserve. Park rangers run across the miners regularly, but the latter are well-armed so the rangers do little more than observe. The report identified 16 illegal mining camps in the Tambopata reserve, a national park.

Informal mining settlements sell fuel and chemical inputs in broad daylight. It is common to see satellite phones and cable antennas. Prostitution bars are another fixture of the camps. An estimated 400 brothels are operating in Madre de Dios alone.

The United Nations has recently expressed concern about the construction of a road through the Manu National Park, a UNESCO World Heritage Site. The Madre de Dios state government built over nine miles of road through the park to Puerto Maldonado despite not having approval from Peru’s national park service.

Critics say the road will be used to transport fuel and other inputs for the illegal mining and logging industries. Meanwhile, Madre de Dios congressman Amado Romero is pushing for the transportation commission to approve the viability of the road. Romero, who has been suspended from Congress for his links to illegal mining before, insists the road is needed to connect indigenous tribes of Manu province to Puerto Maldonado.

While Romero is a leader in advocating for illegal miners even if he doesn’t acknowledge it, similar candidates in 2016 elections are looking to represent Madre de Dios and Puno in Congress. El Comercio has identified candidates suspected of having links to illegal mining on the Popular Strength, Peruvians for Change, Possible Peru and Broad Front tickets in Madre Dios, as well as on the Popular Strength, Peruvians for Change and Everybody for Peru tickets in Puno.

President Ollanta Humala’s government has passed a series of laws aimed to curb illegal mining, including prison sentences of 10 years.

Another law regulated the sale of key chemical inputs in Madre de Dios state, and limited the amount consumers who were not registered as miners could buy. This regulation prompted protests which paralyzed the provincial capital of Puerto Maldonado for over a week.

The government points out that more than 70,000 informal miners have begun the registration process. However only 40% of those have gotten past the second of five steps.