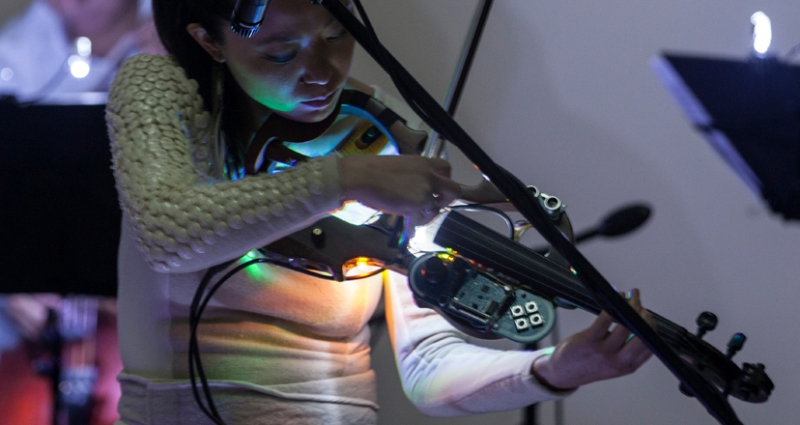 Peruvian violinist Pauchi Sasaki was selected to apprentice under American composer Philip Glass by the Rolex Mentor and Protege Initiative.

The Rolex Mentor and Protege Initiative panel of experts designates a mentor from top professionals in disciplines including dance, visual arts, literature and more for a one-year mentorship with their chosen apprentice. The organization chose Glass as its 2016 music mentor, and Glass selected Japanese-Peruvian violinist, composer and multimedia performance artist Pauchi Sasaki.

The Rolex program requires Glass to spend a minimum of six weeks with Sasaki, but the two can agree to whatever terms suit them. The organization will grant Sasaki a $25,900 stipend in addition to travel expenses, plus $77,700 at the end of the year and another $25,900 to fund a new piece of work or performance.

The 33-year-old Lima native first learned to play the violin at five years old. She has studied at the CEMDUC music and dance school at Lima’s Catholic University, where she also earned a degree in journalism. She later earned a music degree from Mills College in California.

Sasaki has released two solo albums, “Yuyu” in 2007 and “KoPpu” in 2011, and her compositions have been featured on more than 30 film scores. She has worked with high-profile composers including Pauline Oliveros, Fred Frith, Maggi Payne and Laetitia Sonami.

Founder of the Philip Glass Ensemble, Glass has produced dozens of operas and symphonies as one of the world’s preeminent composers. He has composed music for films including “Candyman,” “Fantastic Four” and “The Fog of War.” His score for “The Truman Show” won a Golden Globe Award in 1999, and his work on “Kundun,” “The Hours” and “Notes on a Scandal” were nominated for Academy Awards.

“[Sasaki] looks forward to expanding her musical horizons by creating an orchestral and electro-acoustic opera under his guidance,” according to the initiative sponsored by luxury watchmaker Rolex.

The philanthropy aims to contribute to the arts by “seeking out gifted young artists from all over the world and bringing them together with artistic masters for a year of creative collaboration in a one-to-one mentoring relationship.”

Watch Pauchi Sasaki perform at the Miraflores Theater Auditorium in 2013.