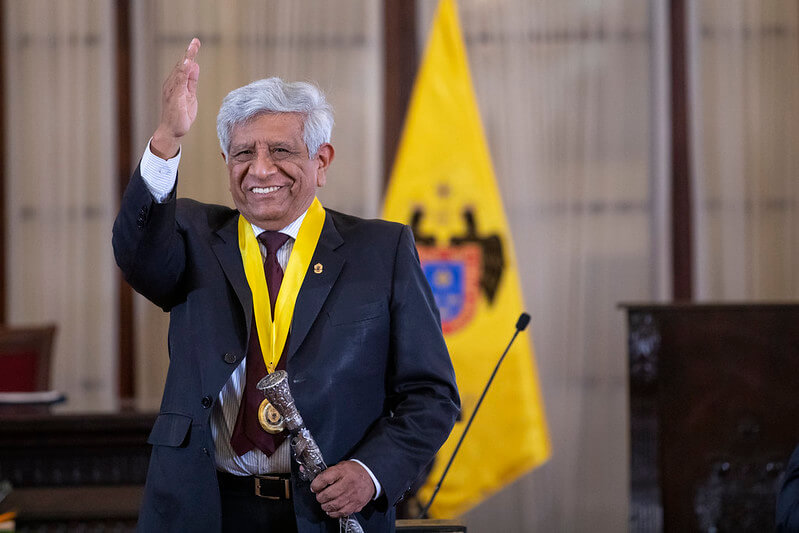 Former Deputy Mayor Miguel Romero was sworn in as Mayor of Lima. Image courtesy of Metropolitan Municipality of Lima

Former Deputy Mayor Miguel Romero was sworn in as Mayor of Lima weeks after his predecessor, Jorge Muñoz, was impeached for serving on the board of a state-owned company while in office.

Mr. Romero assumed office on May 9 and will finish out his predecessor’s term, which is set to expire at the end of this year. Peru will hold regional elections on October 2 which will include a mayoral race in Lima.

“Fate has allowed me to take office and complete the municipal administration. Time is short and citizens only expect results,” said the new mayor during a ceremony.

My commitment is to promote a dialogue with all the powers of the State. Because the city needs not only to improve administration, but also coordination with the government, which has the necessary resources to complete the projects that the capital needs.

Mr. Romero said that Lima is currently like “a sick organism,” with insufficient transportation, and other deficiencies such as the lack of water and drainage.

During the ceremony, the new mayor asked Peru’s Congress to schedule a debate regarding the restructuring of Peru’s districts, in order to have an orderly development of the city.

For Mr. Romero, the fact that Lima is organized into 42 districts is inefficient for the administration of public services. For this reason, he proposed to create five administrative territories: North Lima, South Lima, East Lima, South Beaches and Central Lima.

In each territory, a territorial mayor’s office would be established to manage the development of the districts.

Mr. Romero also promised that the public projects initiated by Mr. Muñoz will be completed, including the expansion to the north of the “Metropolitano,” a bus rapid transit (BRT) system that operates in Lima and is very popular.

He also said that the highway that will pass over the “Monitor Huáscar” roundabout, located in the Surco district, must be completed. This is a major project that will relieve traffic in Lima, especially for the districts of La Molina, Surco, Ate, San Luis and San Borja

More than 30,000 cars pass through this area daily and it’s estimated that the project will be able to save about 30 minutes of travel for Limeños.

Mr. Romero is an architect by profession. He graduated from the National University of Engineering and was dean of the Architecture Faculty at the University of San Ignacio de Loyola.

“There is no time to lose. In these eight months ahead, it is our purpose to continue promoting the necessary projects to improve people’s quality of life,” he said during the ceremony.