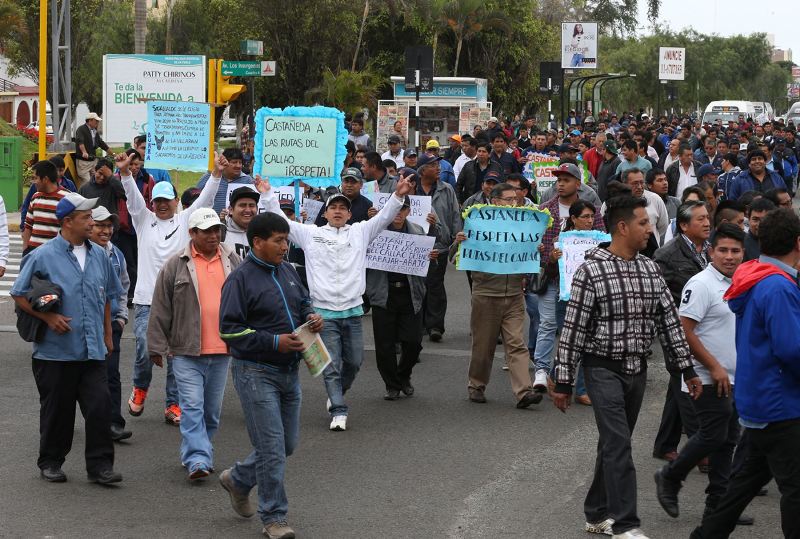 A strike by Callao bus companies against Lima’s Blue Corridor transportation reform brought traffic to a standstill in Callao yesterday.

Over 150 bus companies representing a fleet of over 1,500 buses did not run their regular routes yesterday. Almost all of Callao’s bus companies supported the strike, causing hours of delays. The limited availability of Lima’s Blue Corridor buses prompted pickup trucks and taxis to fill the void, charging as much as $6 per passenger.

The bus companies are protesting the removal of existing licensed bus routes from the Javier Prado corridor which includes Javier Prado, La Marina and Faucett avenues. While most of the corridor lies outside Callao, the local bus companies depend on passengers going to destinations along the corridor throughout metropolitan Lima.

“This protest is against the Municipality of Lima, which sent an official letter to Callao to cancel 160 routes that provide service between Lima and Callao,” a bus company representative said.

“Lima does not respect our 10-year licenses awarded by Callao,” said Maricela Millan, a representative for a Callao trade organization.

Callao is home to South America’s largest Pacific seaport as well as the Lima’s Jorge Chavez international airport, one of the continent’s top regional hubs. While metropolitan Lima engulfs the area, Callao is administrated separately as a “constitutional province.”

Protesters held up mocking effigies of Lima mayor Luis Castañeda and former mayor Susana Villaran, the latter of whom designed the controversial transportation reform. The removal of private buses from Lima’s main thoroughfares is part of the Blue Corridor initiative which organizes the main avenues under public management.

The Blue Corridor system also modernizes the bus fleet compared to the decades-old “combis” and “custers” which previously circulated the route.

“The strike has mainly harmed the people of Callao,” said Lima municipal spokesman David Hernandez. “It’s been a strike against ordered transit. Rest assured, users and organized transportation will not be cheated. The transportation reform is irreversible.”

The city of Lima also cancelled all the licenses of Grupo Orion, one of Callao’s largest bus companies, after a series of reports in the El Comercio newspaper showed the company avoided millions of dollars in fines and returned serially offending drivers and their buses to the roads by using various legal maneuvers and appeals.

While transit in Callao returned to normal today, a second strike is planned in Lima for Oct. 29.