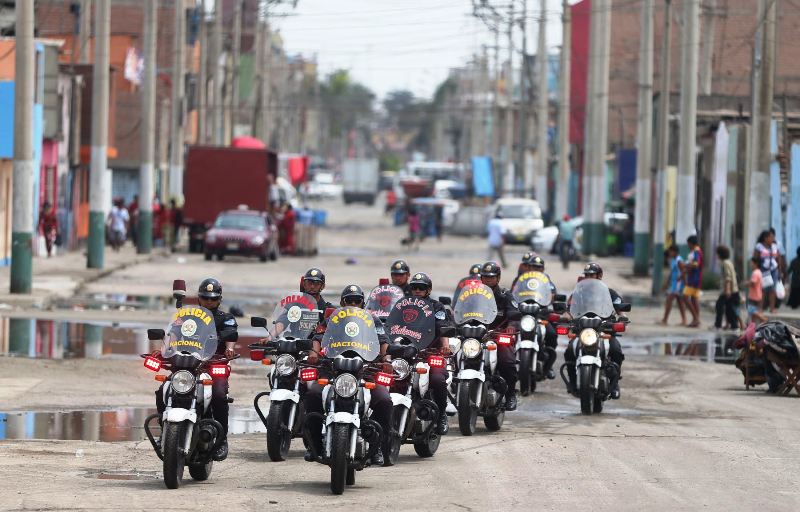 President Pedro Pablo Kuczynski and members of his Cabinet have outlined a package of reforms aimed at combating crime in Peru.

Rising crime was the top concern for voters in 2016 election, in which Kuczynski defeated hardliner Keiko Fujiomori by the closest margin in Peru’s history. Kuczynski, Cabinet chief Fernando Zavala and interior minister Carlos Basombrio presented 29 measures to reduce crime and corruption on Wednesday.

“The biggest challenge facing Peru today is security in the streets, homes, roads, everywhere,” Kuczynski said at a press conference to announce his government plan. “During the campaign we said we were against gimmicks. This plan will work. Success can be measured in just one way, whether Peruvians feel safe on their streets, in their homes and at their businesses.”

Among the most notable policy announcements is the expansion of a reward program for citizens who provide information to police which leads to an arrest. The program which began last year during Ollanta Humala’s government is credited in leading to the arrests of several high-profile fugitives. The government will publish a new list of rewards for the capture of 100 fugitives nationwide.

“Engaging citizens in repressing crime ultimately reinforces the rejection of crime and complicity, making a tangible [reinforcement] in the pockets of informers that fighting crime pays,” states an El Comercio editorial on the reward scheme.

Police will also conduct 30 sting operations against organized crime gangs throughout Peru in the first 100 days of the new government.

The government will allocate $300 million to upgrade 500 police stations with modern equipment over the next five years, and increase the size of the police force by 10% and train 500 new detectives. The interior ministry will also develop evaluation criteria for police stations and present national policing awards for the most effective stations in Peru.

Police vehicles will be outfitted with GPS so they can be monitored from the station. “This is a key issue for police monitoring, to know where the patrol car is and how long it takes to respond to a crime,” Fernando Castañeda, a security expert at the ombudsman’s office, told El Comercio.

Basombrio said he wants to give local officials such as state governors and provincial mayors a role in designing plans with police to patrol neighborhoods and combat crime most effectively in their districts.

The “Safe Traveler” program to beef up security around Peru’s top four airports.

New intelligence teams will be formed and equipped with wiretapping technology to tackle organized gangs in coordination with prosecutors and judges. Some of these teams will work with Peru’s labor department, construction unions and construction companies to identify bad actors who infiltrate unions to develop extortion rackets.

Kuczynski made combating corruption a central theme of his candidacy. His government will beef up the police internal affairs department to investigate corrupt police and officials. It will also conduct undercover operations throughout the country to catch corrupt police and government officials, as well as “corrupter” citizens who push bribes.

After a rash of high-profile crimes involving grenades dominated headlines last year, the interior ministry will design and implement a strict accounting method of guns and ammunition used in the police force and military to prevent arms from being sold in the street.

Another often repeated promise from Kuczynski’s campaign was to raise police salaries. He also plans to “declare an emergency” in order to address problems at the police healthcare system and improve police hospitals.

In what seems to be a departure from his criticism of Keiko Fujimori’s plan for the police, the 29 points include one which would prohibit police from wearing their uniforms or carrying their weapons in second jobs “without restricting any other lawful activity in their private time of police personnel.” Kuczynski famously quipped during the campaign that police can’t be working security “at the Chinese restaurant.” It is not clear if security work outside of the police force would be “lawful activity” for officers.

Basombrio added that the government had taken the tentative decision to end a state of emergency in Lima’s port region of Callao, which has effectively placed the area under martial law since December.

“The authorities and Callao police believe that the state of emergency has met its objectives,” Basombrio told Andina. “However, it would be prudent to give it 30 days, as they say, to ensure the victory.”

Street crime and citizen security grew to become voters’ top concern as robberies and burglaries have increased 80% and 92% respectively in the last 10 years. Lima, Callao, Arequipa, Tumbes and Madre de Dios have the highest crime rates in Peru.