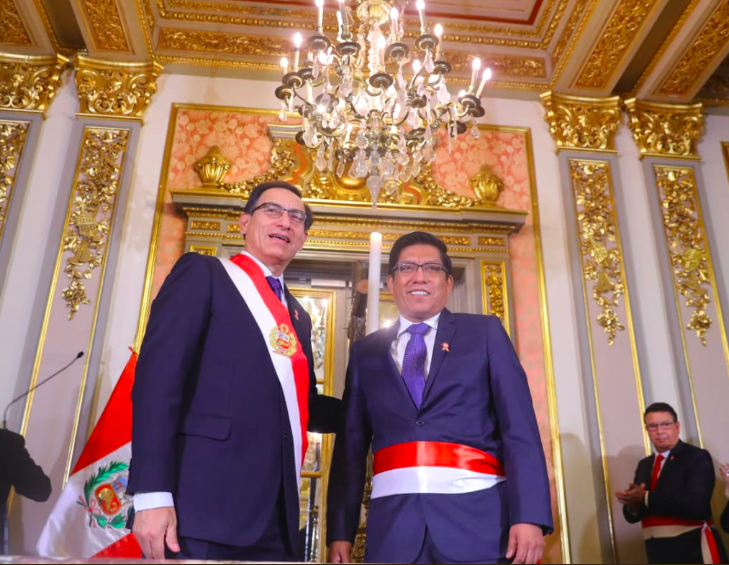 Vicente Zeballos was sworn in as Peru’s Justice Minister over the weekend, being assigned to clean up the country’s wide-reaching judicial corruption mess that has reached his own office.

The former lawmaker fills the vacancy left by Salvador Heresi, who was recently forced to resign when it came to light how rampant corruption has been in Peru’s judiciary after audio tapes leaked by investigative news site IDL-Reporteros have shown some of the country’s most powerful judges accepting bribes in exchange for light sentences and ruling with favoritism.

President Martin Vizcarra has promised the Peruvian people a zero-tolerance policy on corruption throughout the government and is receiving his first true test of that policy with the current scandal.

Heresi has denied wrongdoing and has said that he received “unnecessary mistreatment” from Vizcarra.

Upon taking over, Zeballos said he will fully support the president’s plan to help the commission for judicial reform that seeks to further investigate compromised judges in Peru’s highest courts.

“He’s taken a brave stance and, it’s again evident, the leadership that the president has by virtue of this huge reform he is undertaking to find better justice for the country,” Zeballos said of Vizcarra’s policies on Peru’s Canal N news.

In that same interview, Zeballos mentioned that newly sworn-in Chief Prosecutor Pedro Chávarry should “step aside” after his apparent involvement in the audio tape scandal. Chávarry was heard speaking with Supreme Court Justice César Hinostroza, who has already been featured in a number of the leaked tapes. The friendly conversation, in which Chávarry invites Hinostroza to a large lunch, presents a clear conflict of interest as it will ultimately be Chávarry investigating and bringing possible charges up against Hinostroza.

Despite the new leaks involving Chávarry, he was sworn into his elected post on Friday.

“There hasn’t been a unanimous agreement for Chávarry to be designated and sworn in,” Zeballos told Canal N. “It was a vote that was rushed and it’s clear that it wasn’t a clear-cut vote, when ideally it would have been a unanimous decision.”

He suggested that Congress should work together to force Chávarry’s suspension or permanent exit from the head of Peru’s Prosecutor’s Office.

Zeballos, a former Congressman, was also the mayor of Moquegua from 2003 to 2006.