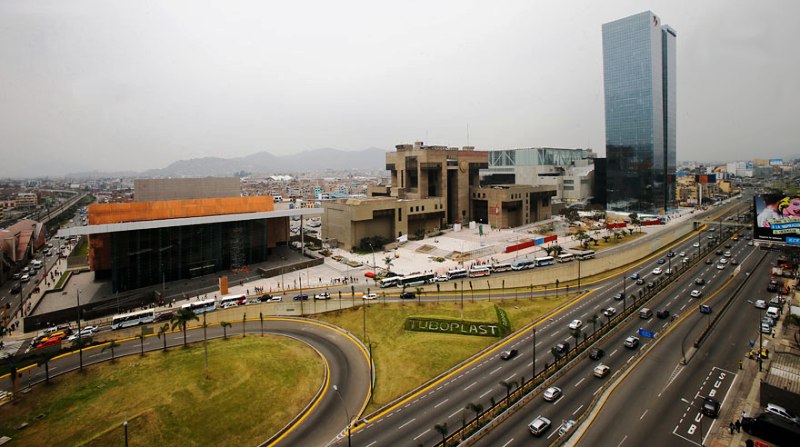 The Monday inauguration of the tower which features 700,000 square feet of office space will mark the beginning of events surrounding the 2015 annual meetings between the International Monetary Fund (IMF) and the World Bank Group.

While official meetings between the two financial institutions will be held between Oct. 9 and Oct. 11, the event which is expected to attract 16,000 visitors features various conferences, policy forums, seminars and other events which will take place from Oct. 5 through Oct. 12.

The Banco de la Nacion tower will be one in a corridor of buildings to host the conferences. The National Library, National Grand Theater, Museum of the Nation and Lima Convention Center sit within one block from the tower at the intersection of Javier Prado Este and Aviacion avenues.

The new Lima Convention Center will also be inaugurated to coincide with the World Bank-IMF annual meetings. The $155 million facility will hold up to 10,000 people in 22 conference rooms, including one which will be Latin America’s largest with a capacity of 3,000.

The annual meetings between the World Bank and IMF are held outside Washington, DC every third year. Lima will be the first Latin American city to host the financial institutions’ annual meeting in 48 years.

The events bring together financial officials, business leaders and influencers from 188 countries to discuss economic progress and social development over seven days of various seminars and conferences.

The San Borja corridor of conference facilities forms part of the government’s strategy in becoming Latin America’s leader in attracting business tourism. Next year the Lima Convention Center will host the 2016 APEC Summit, the United Nations Conference on Trade and Development conference and the UNESCO World Congress of Biosphere Reserves.

The 2015 Annual and Spring Meetings (IMF)