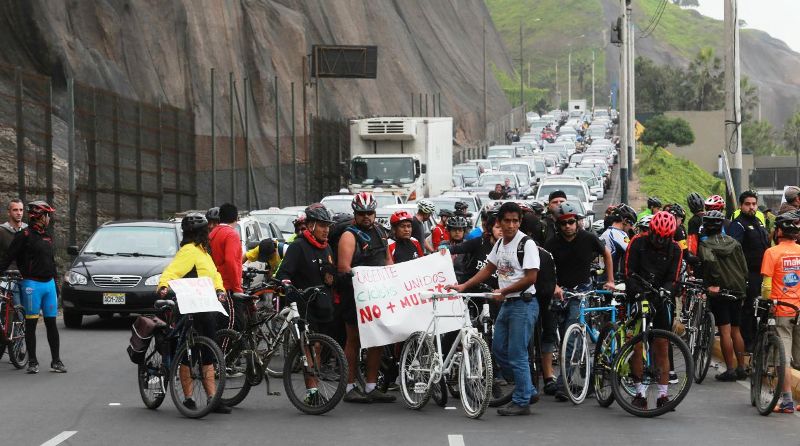 Gustavo Lopez was killed last Saturday, Aug. 15 on the Costa Verde highway which straddles the Pacific Ocean along the coast of Lima. Martin Lozano was killed on Tuesday on Pachacutec avenue in San Juan de Miraflores.

Ironically, Lopez attended a protest against high speeds on the Costa Verde. While toxicology reports showed he had been drinking before the accident in which he tried to cross the highway without looking, the truck that hit him was speeding.

In San Juan de Miraflores, Lozano was run over by a speeding bus.

Last Wednesday Cicloaxion, a non-profit dedicated to promoting cycling interests for urban transport, organized a protest. Demonstrators met at Parque Kennedy in Miraflores before cycling down to the Costa Verde, which they blocked for 40 minutes.

“Creating safe space is the only way to promote the use of bicycles,” says Cicloaxion president Octavio Zegarra. “It has been shown that the more cyclists there are on the streets, the less accidents happen, because people get used to our presence and they learn to respect our rights.”

Only 100,000, just over 1%, of Lima residents currently use bicycles for transportation. However the majority of those urban cyclists ride in areas like San Juan de Lurigancho and Rimac, which do not have any of Lima’s 75 miles of dedicated bike lanes. Zegarra says that 300 miles would be ideal to serve the entire metropolitan area.

The national ombudsman and city planners have joined the cyclists’ call for safer infrastructure along the Costa Verde for bicycles and pedestrians. Last week Lima’s municipal government implemented cameras to enforce the 25 mile-per-hour speed limit along the Costa Verde, assessing $211 fines for violations.

On Thursday Lima mayor Luis Castañeda said that his administration would build bike paths and sidewalks along the Costa Verde.

“We’re going to do it. We have the project and we’ll begin soon,” Castañeda said. “Unfortunately accidents happen and it doesn’t matter if there are three or five lanes.”

The Costa Verde is a road which runs along the coast of Lima through the southwestern districts of San Miguel, Magdalena, Miraflores, Barranco and Chorrillos. The coast features popular beaches, sports parks and tourist restaurants. However there are few opportunities to cross the road without facing high-speed traffic.

Argentina to return 4,500 artifacts to Peru and Ecuador