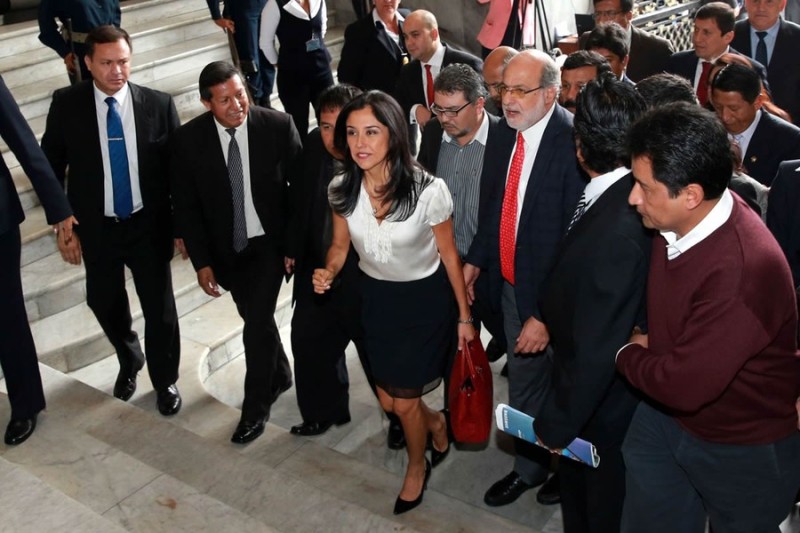 In August a federal judge in Lima granted Heredia’s appeal for habeas corpus in a ruling in which he wrote the prosecution had failed to prove that a specific crime had been committed.

Prosecutor Ricardo Rojas’s declaration to appeal the decision was validated yesterday when Peru’s top court voted unanimously to reopen investigations into the first lady and president of the ruling Peruvian Nationalist Party for her interests in the Todo Graph company founded by jailed influence-peddler Martin Belaunde as well as campaign contribution irregularities.

“The second prosecutor’s investigation has identified new people as well as new facts and evidence that did not form part of the first investigation,” wrote justice Marianella Ledesma, referring to testimony given by Belaunde since his extradition from Bolivia as well as four notebooks attributed to Heredia which detail millions of dollars in transactions.

“They are ignoring the Constitution,” said Roy Gates, Heredia’s lawyer. “The [executive branch] does not have any way to influence the supreme court, but Congress does. They threatened the justices with sacking them, with sending them to jail.”

Another of Heredia’s lawyers, Anibal Quiroga, raised the possibility of appealing the court’s decision to the Inter-American Commission on Human Rights for violating Heredia’s right to a speedy trial.

However few if any critics of the court’s decision emerged from outside Heredia’s legal team or the Nationalist Party.

“The supreme court has improved its legitimacy before the public in a demonstration of independence, autonomy and impartiality,” said former justice Victor Garcia.

“We salute this firm decision from the supreme court,” said right-wing congressman Humberto Lay. “This is good news. The citizens demand that, once and for all, the truth be known about the allegations involving the first lady.”

The court’s decision comes at a time when Heredia in increasingly mired in a dizzying array of corruption charges which include payments for allegedly false contracts she received from companies linked to Martin Belaunde, her alleged ownership of the Todo Graph and Antalsis companies also linked to Belaunde, cash donations from the government of Venezuela during Humala’s failed presidential bid in 2006 and more.

Last week prosecutors in Callao announced they were investigating Heredia for contraband charges stemming from $38,000 in clothes and jewelry her friend Rocio Calderon did not declare in bringing through the Lima airport.

Yesterday Peru’s justice minister resigned over a scandal in which he tried to silence prosecutors from speaking out against the first lady. Before resigning, the most vocal critic was sacked via a public decree signed by the president.

The legal battles come at a time when President Ollanta Humala’s approval rating continues falling to new lows, which analysts attribute to the increasing evidence of corruption incriminating the first lady and the Peruvian Nationalist Party, which has seen almost half of its legislators and the vice president quit the party this year.