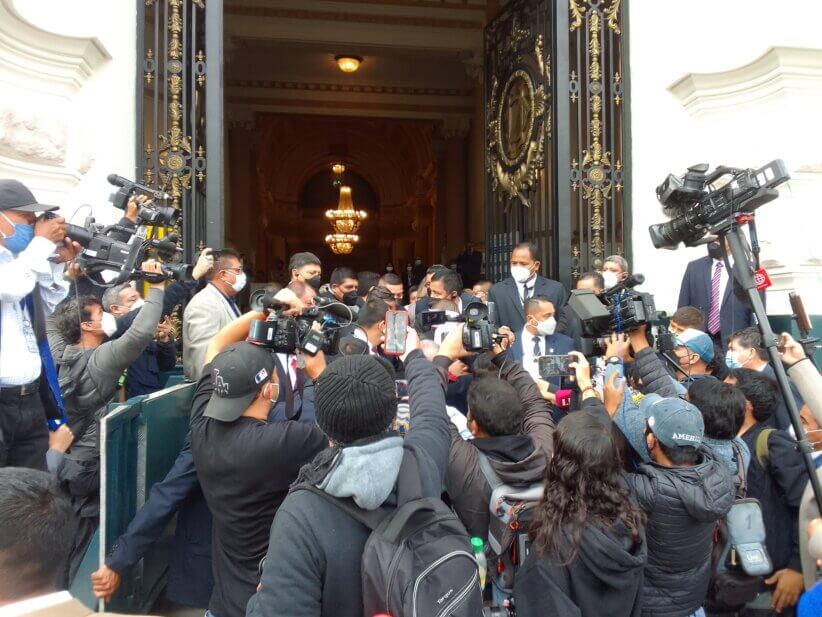 Group of journalists holds a sit-in in front of Peru's Congress to demand access for the press. Image courtesy of @ConsejodePrensa via Twitter.

Journalists from various media outlets in Peru staged a sit-in outside Congress last Thursday in response to entry restrictions imposed on them by the body.

Access to Congress for journalists remains prohibited since March 2020, when the COVID-19 pandemic began. However, since the end of February, the Peruvian government has allowed 100% capacity in all public and private establishments.

Due to the restriction, journalistic coverage must be carried out outside the Congress building, where cameramen and reporters are exposed. The local media have no choice but to rely on the official signal from Congress.

On the morning of May 12, representatives of the most important press unions in the country asked the president of Congress, María del Carmen Alva, to receive them. They wanted to request the support of those congressmen who defend press freedom.

“The return of journalists inside Parliament is urgent. Pandemic restrictions are no longer a valid argument to keep the media out,” read a statement from the National Association of Journalists.

As Mrs. Alva arrived at Congress on Thursday, journalists complained to her about the ban. Mrs. Alva confronted the reporters and demanded that they “not misreport.”

After the outburst, the president of Congress later approached the press and assured them that spokespersons from the various political parties will evaluate and make a decision about the journalists’ request to return inside of Congress to report.

As a sign of protest, the media outlet Exitosa decided to suspend coverage of the Congress events from May 13.

The journalist Augusto Álvarez Rodrich, president of the Institute for Press and Society (IPYS), one of the unions that was involved in the sit-in, reminded listeners that the press has the right and the duty to report on what is happening in Congress.

“This is not a request, it is a demand, the press has the right and the duty to report the entire process. They are affecting transparency,” he said.

In other countries of the region, including Ecuador, Uruguay, Bolivia, Chile and Colombia, the press can freely access congressional buildings, according to reports.

Does the future of education in Peru lie in programming? This Peruvian edtech startup is betting on it