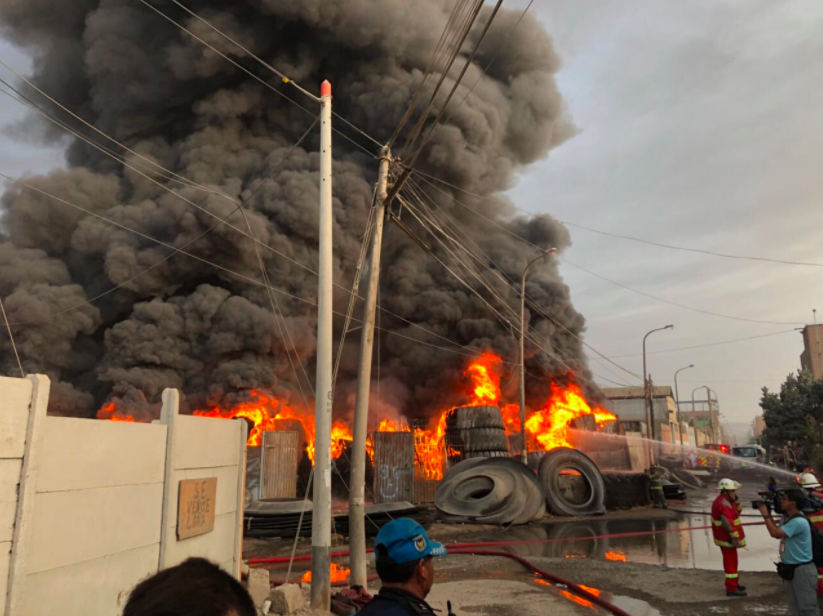 A fire that started in a Lima tire shop sent dark black billows of toxic smoke into the city’s air Thursday morning.

The fire that took place at the shop called Intercaucho Colors in the Comas District of Lima took 34 firefighters seven hours to fully contain it, according to CNN. No injuries were reported.

Peru’s Health Ministry sent out an alert saying that smoke from burning tires presents a serious health risk to anyone close by breathing in the fumes.

Health Minister Silvia Pessah told reporters Thursday that people should stay clear of the fire site under the red-warning was lifted.

“There are some people just in front of the area of the fire that are staying there,” Pessah said. “This is extremely dangerous. I’ve talked with some of them and they’re going to leave. The most important thing is that we now have medical spots set up to attend any medical complication.”

The cause of the fire is not yet known but the company Intercaucho Colors has been criticized in the past for using a wall of tires outside of the shop instead of using a normal brick wall or gate.

“The way we had it had been the healthiest way for us to be able to cover the whole area, the most organized and ordered way,” said company rep Bryan Moncada on air to Peru’s Canal N news station.

According to the Education Ministry, more than 100 schools in or near the area had to suspend classes Thursday.

All photos below are courtesy of Peru’s Health Ministry: