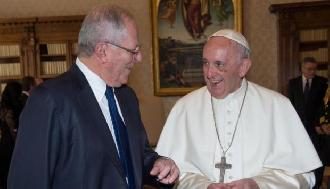 Pope Francisco is expected to arrive in Lima as part of a 3 day visit to Peru tomorrow. The visit has been keenly anticipated for some time now with many of the major newspapers devoting entire sections to the papal visit.

After a welcoming ceremony on Thursday, he’ll be leaving early morning Friday for the city of Puerto Maldonado to meet with representatives of the surrounding villages of the Amazon. Performing a sermon at the Coliseum, Pope Francisco will address 3,500 indigenous inhabitants of the region before returning to Lima once again in the afternoon where he will meet embattled President Pedro Pablo Kuczynski (PPK) who, if he doesn’t ask for a blessing, will almost surely be looking for a miracle at this stage for respite from the multiple probes directed at him for alleged corruption.

The President wrote during his trip to Chile after meeting the Pope that ‘[we] welcome Pope Francisco to the land of Latin Americans. Our people await with enthusiasm his message of unity and hope. In a few days we will have the honour of receiving him in Peru.’

On Saturday morning, Pope Francisco will fly north to the coastal city of Trujillo where he will take his talents to Huanchaco Beach to deliver a homily and briefly circle the neighbourhood of Buenos Aires in his Pope-mobile. He will deliver 2 sermons in the evening and return to Lima before 8pm.

On his last day in Peru, Pope Francisco will stay in Lima and perform prayers at the Santuario del Señor de los Milagros, the Cathedral of Lima, the Archbishop’s Palace and Plaza del Armas. He will return to Rome at 6:45pm.

Being Argentinian, Pope Francisco enjoys a popularity not afforded to his predecessors in a continent that is still dominantly Catholic. If his reception in neighbouring Colombia last year is anything to go by, Peru can expect standstill traffic as well as a minute-by-minute coverage by local news media.

Though the coverage of his Holiness’ visit has been filled with plaudits, particularly his championing of human rights and protection of the environment, the praise has not been unanimous. One victim of systemic abuse as a child by a Catholic priest has asked Pope Francisco to go beyond asking for forgiveness as he had in Santiago, Chile, and follow through his words with concrete action.

A full programme of the papal visit in Spanish can be found here.