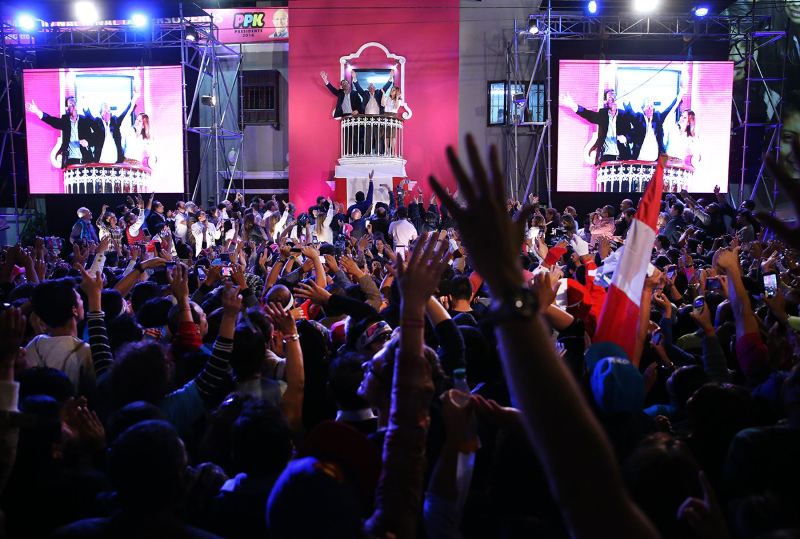 While the election is too early to call, exit polls indicate Pedro Pablo Kuczynski will defeat Keiko Fujimori to become Peru’s president from 2016 to 2021.

Exit polls conducted by Ipsos showed Kuczynski obtained 50.4% of the vote held throughout Peru on Sunday, compared to 49.6% for Fujimori. Similar data from GfK showed Kuczynski winning 50.9% over Fujimori’s 49.1%.

Peru’s elections authority, ONPE, announced on Tuesday eveing with 99.1% of votes counted that Kuczynski had won 50.2% of the vote compared to Fujimori’s 49.8%.

“Thank you, Peru! We will respectfully await the official results,” Kuczynski tweeted after the Ipsos results were published.

Meanwhile Kuczynski won the Lima metropolitan area, home to a third of Peru’s voters, with 51.3% of Lima and 50.7% of Callao.

Kuczynski told his followers at a rally in front of his Lima campaign headquarters not to remain vigilant so the election would not be stolen at the polls. However the scene at his rallies were clearly celebratory compared to those of Fujimori’s Popular Force, where spokesmen played down the early poll data by saying the race was too close to call.

“The numbers we see on television show that there is a dead heat, so we will patiently wait all night as votes from abroad and the countryside come in,” Fujimori told supporters at her campaign headquarters in Lima.

Ipsos’ exit poll forecasts after Peru’s first round of voting predicted the top three candidates within a half percentage point of the final results.

This article is being updated as the story develops.

Fujimori and Kuczynski seen tied one day before Peru’s election

The Afro-Peruvian poet behind Kuczynski’s one-liner