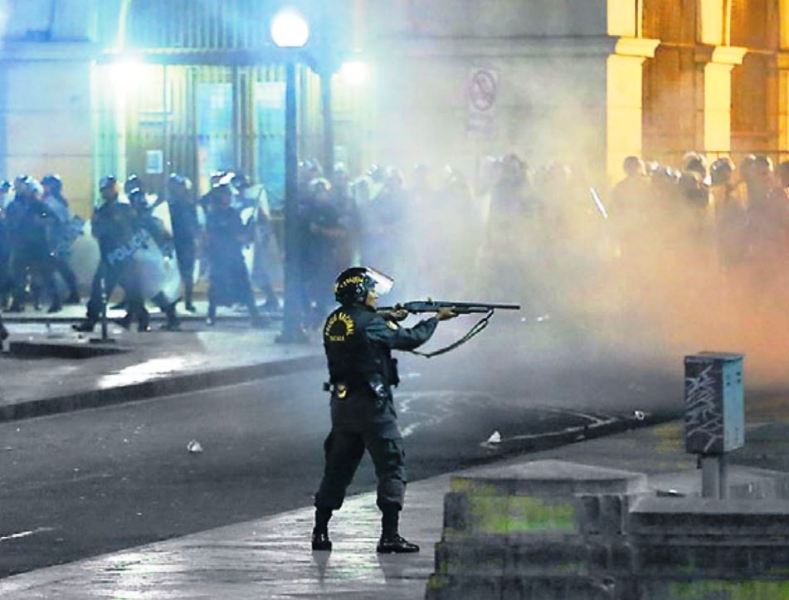 Peru’s government has enacted by decree a law that allows police to use lethal force during protests in situations of self-defense or defense of others.

The law comes in a year which has seen seven people killed in protests in the states of Arequipa, Ica and Junin. The deadly protests included three mining interests and one natural gas project.

Six of the seven were protesters killed by police bullets, including an engineer in last week’s La Oroya protests. One of the seven was a police officer who was surrounded by a mob protesting against the Tia Maria copper mine in Islay province. Of the seven killed, four died in Tia Maria protests.

“There was no provision within the law that would guarantee the national police’s use of lethal force, which is completely different from the use of violence,” said interior minister Jose Luis Perez. “The armed forces have a law, but the Peruvian National Police only have protocols and manuals that lacked legal protection.”

The new law states that police are legally allowed to fire their weapons in self-defense or to defend the lives of others in situations of imminent death or serious injury. The law specifies that such conditions can be met while a suspect is committing a crime, resisting arrest, trying to escape arrest or participating in a violent protest.

“This is the typical example from Islay,” Perez said in an interview on RPP last night. “You have 100 people with rocks and one isolated police officer. Obviously everybody with rocks is going to advance and they’re going to kill him. [In that scenario, the officer] can use his lethal weapon, of course. The defense of life comes first.”

Perez added that rocks launched from a sling, a common weapon of protesters in the Tia Maria demonstration, comprise a threat to life. “A rock launched by a sling kills.”

However some officials see the law as ripe for abuse and excessive force.

“One example is what happened in La Oroya. If I’m a police officer and I see somebody with a stick, can I shoot him?” asks former police chief Eduardo Perez. “In a [land invasion] removal, a man goes to the highest point and throws Molotov cocktails in a show of resistance. With this law, the police are authorized to shoot to kill and nothing happens.”

Interior minister Jose Luis Perez insists that the law complies with international standards for lethal use of force by law enforcement, which require a nexus to be met in legality, necessity and proportionality.

The law was enacted under decree powers granted to President Ollanta Humala’s government by congress in June, which allowed the norm to bypass congressional debate.

Five police officers are being sanctioned for unlawful discharge of their weapons during the La Oroya protests.