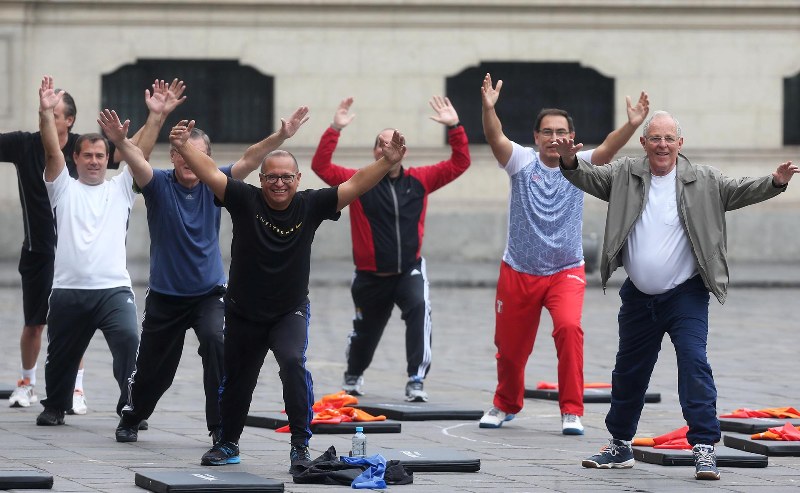 President Pedro Pedro Kuczynski drew the ire of opposition legislators when he and his Cabinet started their first weekly meeting with a vigorous workout.

Before tucking into the serious affairs of the republic, the 77-year-old Kuczynski led his Cabinet ministers down to the Government Palace courtyard to exercise in front of a crowd of bystanders.

“We want to promote health, a healthy mind and a healthy body,” a grinning Kuczynski told reporters to the din of electronic music.

However the aerobic unity did not go over well with some opposition party members.

“It’s good that PPK and other ministers exercise, but not to do so with NIKE and ADIDAS,” tweeted Popular Force congresswoman Karina Beteta, who was clearly not invited (capitalization hers).

Fellow Popular Force member Carlos Tubino also thought Kuczynski’s “preppie” choice of fashion was in poor taste, along with the late start. He suggested a more appropriate time of 6 a.m.

“It’s like I came here to Congress at 9 a.m. and there were 73 congressmen exercising instead of working. We get paid to work,” bewildered Popular Force member Hector Becerril told reporters.

However Alliance for Progress members Cesar Villanueva and Edwin Donayre saluted Kuczynski’s promoting sport out in the open.

“Do not forget that in 2019, roughly half way through our term in government, the Pan American [Games] are coming,” Kuczynski added, still feeling the high. “We want everyone to be aware, trained, latent and full of life. Sport is good for everyone and most people can exercise.”

Kuczynski may be looking to set the example and lead the charge for 2020 Tokyo to defeat this year’s record in sending 29 Peruvians to take part at the Olympics in Rio de Janeiro, Brazil.

Health minister Patricia Garcia told the BBC that these weekly sessions will continue to encourage Peruvians to exercise and reduce obesity.

Peru President works out with cabinet in public (BBC)