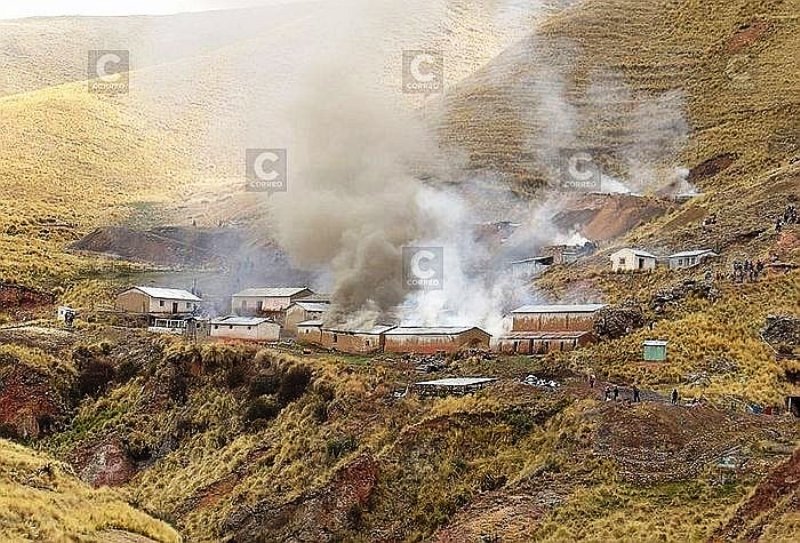 Hundreds of protesters opposed to mining in their rural province fought police and set fire to a Canadian-owned exploration camp in the southern state of Puno on Tuesday.

Residents of the Orurillo district in Puno’s Melgar province announced a two-day protest for Tuesday and Wednesday against exploration activities by Solex del Peru, a subsidiary of Canadian miner Caracara Silver.

“They want to get a mining job which affects the district. They’ve started with the mining camp without conducing informational workshops, so on Tuesday and Wednesday a strike will take place in Orurillo,” Ricardo Noriega, an environmental lawyer leading the movement, told Correo. Noriega added that the strike would be peaceful and protesters would not try to block roads.

“But we must also be ready so nothing happens where, as we have seen, the police themselves infiltrate [the protest] to commit violent acts,” Noriega said.

Clashes broke out when 100 police were dispatched from Juliaca to remove over 200 protesters from a local road. When the police fired tear gas at the crowd, the protesters invaded the Solex camp and set fire to five dormitories and destroyed equipment.

One protester died in an accident unrelated to the clashes, residents told Los Andes. One police officer was injured after being hit with a rock in the face.  Protest leaders agreed to end the two-day strike after the first day.

The Orurillo district has long opposed any mining activity in traditional agricultural region which produces potatoes, quinoa, barley, milk and cheese. Protests and an occupation of the mining camp prompted Ciemsa to abandon the Poderosa lead mine in 2011.

Opposition to Solex del Peru started over a year ago when residents first noticed the company conducting exploration work and taking samples. A newly formed defense front threatened to strike as early as May.

Throughout the year Solex del Peru sponsored six healthcare drives for the 24 villages of Orurillo, in which mobile clinics performed free checkups and distributed basic medicine. But their efforts did not win over the town as environmental organizations held meetings throughout September to underscore their opposition to any mining activity in the area.

“Orurillo is a dairy region and we will not risk our economy with the mining exploitation, because that pollutes,” organization director Amanda Morocco told Radio Onda Azul. Activists say a lead mine will contaminate local water sources.

Some residents told Correo that the opposition in Orurillo is being driven by anti-mining NGO, Tupay Peru, which has sponsored speakers such as former candidate for Puno governorship, Cesar Quispe. Puno police chief Roger Tello told Los Andes that Shining Path pamphlets were found at the road where were police and protesters clashed.

Solex del Peru acquired the extraction license from Ciemsa since the company abandoned the project in Orurillo. Caracara Silver holds dozens of mining licenses for silver, zinc and lead through its Peruvian subsidiaries, Solex del Peru and Alpaca Exploraciones, including the Princesa, Pilunani, Potoni and Cullquimayo projects.

Yesterday’s conflict came less than a week after violent clashes near the Las Bambas copper mine in Apurimac left one protester dead and 20 policemen injured.