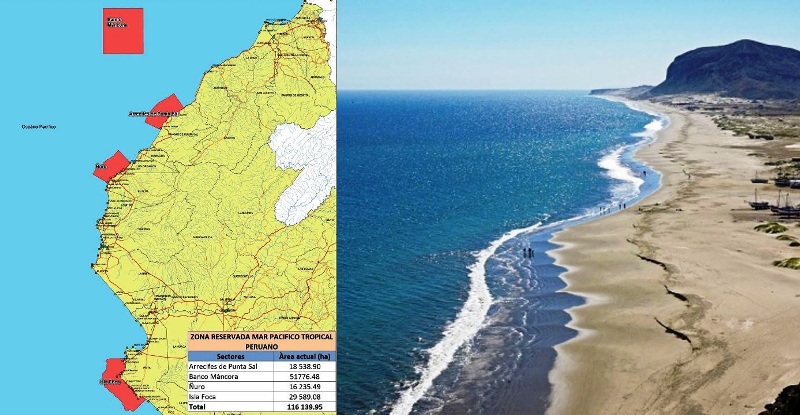 Peru is mulling the creation of a natural reserve to protect marine life in the coastal waters of the northern states of Piura and Tumbes.

Peru’s environmental ministry and national park service have submitted to the government a proposal to create the Tropical Pacific Sea Reserve, which would protect four maritime blocks from industrial fisheries and create waste management regulation.

The unique conditions of these four areas make them the country’s most bio-diverse waters, home to 70% of Peru’s marine species. The reserve initiative would also aim to promote ecotourism through turtle- and whale-watching, development of the beaches and water sports.

“Initiatives which modify the rules agreed upon at the time of signing contracts, such as the proposed Peruvian Tropical Pacific Sea Reserved Zone, do not contribute to the execution of investments,” reads a statement from the Peruvian Society of Hydrocarbons (SPH). “And [they] create uncertainty, both for companies with contracts with the Peruvian government as well as for potential investors the state is trying to attract to Peru.”

Environment minister Manuel Pulgar-Vidal says that the natural reserve will not affect oil exploration or drilling for the state’s binding contracts. He says oil companies’ fears of losing their exploitation rights is a “misconception.”

“We have positive experience in joint management with oil companies. This is the case of Hunt Oil and Repsol with communal reserves,” Pulgar told Andina. “These companies have issued top-notch publications on biodiversity in the [Andean] area.”

Pulgar added that moving the project forward only requires convincing the oil companies with licenses in the planned reserve will not see their businesses negatively affected by the environmental protections. The environment minister says that he believes the reserve will be created before the end of President Ollanta Humala’s government in July.

The reserve enjoys broad support among northern Peru’s fishermen and tourist industries. Tumbes governor Ricardo Flores initially opposed the plan because it would prevent the construction of an irrigation project on the Tumbes river. However he reversed his position due to the overwhelming support from the local public.

According to American environmental nonprofit Nature and Culture International (NCI), the unique upwelling system in Peru’s northern waters is home to 20% of global fish stocks.

“Despite its high levels of biodiversity and economic significance, this eco-region lacks legal protection and faces enormous threats including unsustainable fishing practices, industrial pollution and unmanaged tourism, posing an urgent need for its protection,” reads the NCI website.