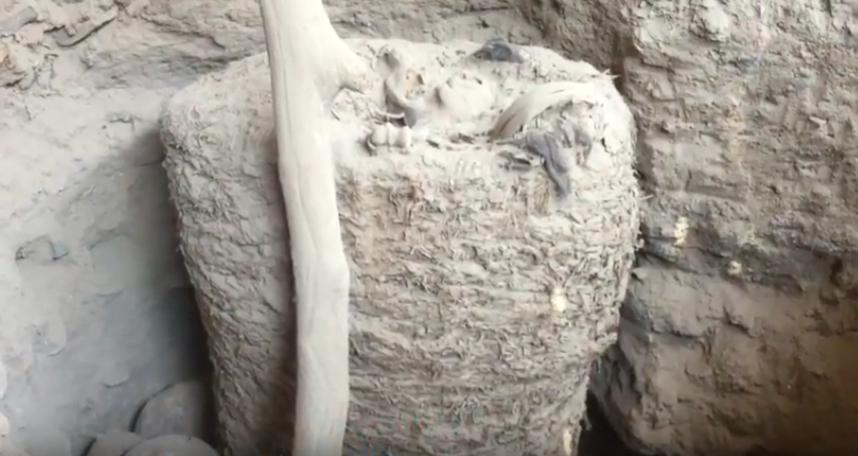 A 1,000-year-old mummy was dug up recently in Pachacamac, Peru in a pre-Columbian site known for its Incan heritage. According to Phys.org, the mummy was intact despite its age when found by a team of archaeologists from the Free University of Brussels.

Though most may think of mummies as being placed in longways tombs or coffins, the Peruvian mummy was found in a vertically shaped bundle.

“The deceased is still wrapped in the enormous funeral bundle that served as a coffin,” said lead researcher and professor Peter Eeckhout. “Discoveries like this one are exceptionally scarce, and this mummy is incredibly well preserved. Samples were collected for carbon-14 dating, but the area in which it was discovered and the type of tomb suggest this individual was buried between 1000 and 1200 AD.”

The exact area in which the mummy was unearthed is called the Ycsha project and is thought to have turned into a sort of temple for the Incas by the 15th century. During an excavation process that lasted nine weeks, Eeckhout’s team found other interesting items that signaled this was a place of worship or a destination for pilgrimages.

Another site yielded evidence of foreign-made products and animals with outside origins, further signaling that this was a place for outsiders to flock to.

“Deities and their worship played a major part in the life of Pre-Colombian societies,” Peter Eeckhout said, according to Phys.org. “The Inca understood this very well, and integrated it into how they wielded their power. By promoting empire-wide worship, they contributed to creating a common sense of identity among the many different peoples that made up the empire. Pachacamac is one of the most striking examples of this.”

Just recently, discoveries were made in regards to Peru’s Lima culture, an indigenous people who settled upon what is now the Peruvian capital nearly 2,000 years ago.