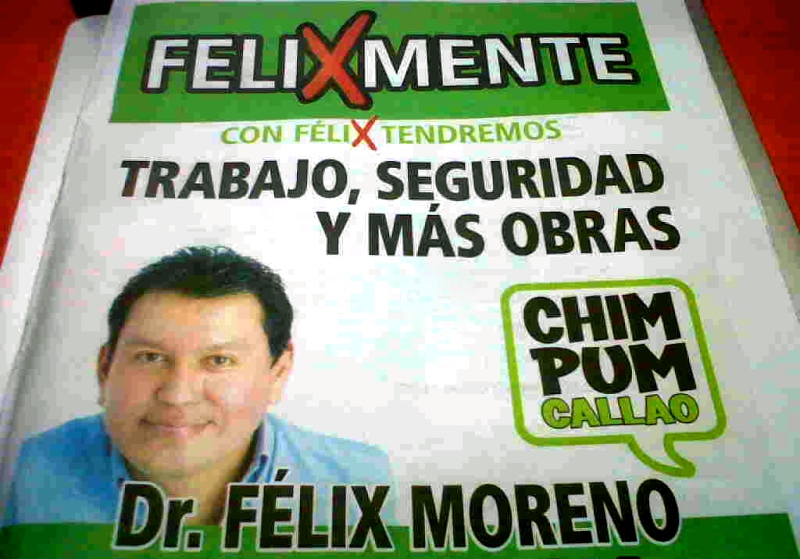 After more than 20 years of undisputed influence in Lima’s port region of Callao, the local ruling political party Chim Pum Callao may be on its way out.

Callao governor Felix Moreno was sentenced to 18 months in preventive jailing while he awaits trial for money laundering, influence peddling, and accepting bribes from Odebrecht. Moreno’s role as governor of Callao has been revoked for 120 days while investigations are underway.

Moreno is only the most recent figure with ties to Chim Pum Callao to be accused of corruption. Chim Pum Callao founder Alex Kouri has been in prison since June 2016 for aggravated collusion and embezzlement in a $45 million highway expansion project.

With two of its founding members charged for various crimes and a laundry list of other politicians associated with the party under investigation, the name Chim Pum Callao, which means “Cry of the soul of the people of Callao,” has become associated with corruption.

“[Chim Pum Callao] is a criminal organization with the etiquette of a political party that was created and founded with the intention of robbing Callao,” Popular Action congressman Victor Garcia told La Republica.

“The Chim Pum movement is a control mechanism that has been in place for years with assistance from the courts, the Government Accountability Office, the police and various media outlets. This is a network not unlike the one created by Fujimori,” Alberto Paz, representative for a Callao community watchdog group, told Canal N.

The origins of Chim Pum Callao can be traced back to the Fujimoria era. Though the party first formally ran under its well-known nomenclature in 2006 elections, Kouri withdrew from the center-right Popular Christian Party to run for Callao mayor in 1996.  Since then Kouri, Moreno and other associates aligned with Chim Pum have consistently swept elections in the district, winning more than 50% of votes in the last two regional elections.

“An element of [Chim Pum Callao’s] hegemony is their manner of politicking, which is characterized by unabashed favoritism. Another aspect would be negotiating with the most violent sectors – mafias, killers – so that, in one way or another, they won’t threaten the party’s goal of maintaining power,” Jose Carlos Rojas, author of a book on corruption in Peru which features a segment on Chim Pum Callao, explained to El Comercio.

“The last 23 years have seen the Chim Pum Callao mafia controlling provincial municipalities. [Chim Pum officials] acquire money and buy votes through gift-giving. They dominate the courts, the National Office of Electoral Processes and even the local ombudsman office. That’s why it’s always been nearly impossible to report anything in Callao. All of the reports are put on the back burner,” Guillermo Cornejo, president of the Social Front for the Development and Defense of Callao, told La Republica.

Despite claims of undisputed power and impunity enjoyed by the party, recent arrests suggest that the tides are changing. La Perla district mayor Patricia Chirinos resigned from the party in the face of the scandal.

“For years in the Callao province there have been serious irregularities in the successive governments of Chim Pum Callao. There has been a prevailing impunity that fortunately began to crumble with Alex Kouri. Now with the arrest warrant for Moreno, the political power wielded by these mafia-like groups in Callao is coming to an end,” congressman Gino Costa of the ruling Peruvians for Change party told El Comercio.

Costa has openly called for the creation of a special committee to investigate corruption in Callao and praised the decision to jail Moreno.

In an effort to respond to the rampant corruption commonplace in Peru’s political landscape, the Civil Transparency Association as well as the Presidential Committee on Integrity and the National Elections Panel have proposed to prohibit candidacy of individuals convicted of corruption and other crimes. The National Elections Panel has also proposed prohibiting candidacy for those sentenced to preventive jailing, like Moreno.

The obvious choice to fill the power vacuum in Callao is Moreno’s deputy governor Walter Mori. However, Mori’s assumption of the regional governorship is pending resolution of 2015 allegations against him for collecting fees for illegitimate professional training workshops. If indicted, Mori’s absence will leave the party without representation in the regional governorship for the first time in decades.

Given the string of recent arrests and investigations against high profile Chim Pum officials, some think the party has already seen its last days.

“I think [Chim Pum Callao] has already disappeared. They have many antibodies, too many liabilities, and they’re tied to corruption,” Peruvians for Change congresswoman Janet Sanchez told Exitosa.

While Chim Pum has been fiercely scrutinized in recent months, some believe the party’s legacy transcends the individuals that comprise the organization’s whole.

“[Chim Pum Callao] has managed in nearly two decades to make themselves into the most important political organization of the seaport,” Jose Carlos Medrano, an ethics professor at Antonio Ruiz de Montoya University, wrote in a report on the organization. “We are witnessing a political movement that, like none other in the country, has managed to win over the minds and hearts of its electorate.”

Peru’s next regional and municipal elections take place in October 2018, which will prove the true test for Chim Pum’s legacy.