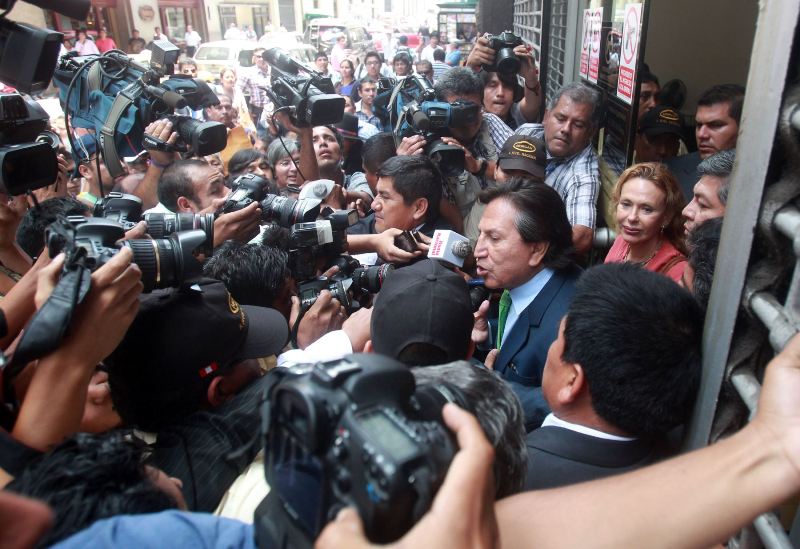 Former President Alejandro Toledo gave a press conference yesterday in Lima to denounce the courts’ handling of money laundering charges against him.

Toledo demanded that prosecutors and the courts resolve charges quickly. Last Thursday, a federal judge sent the case back to prosecutors for “inconsistencies.” The development was the second time a judge returned a case in the 27 months the Ecoteva case has been investigated. Toledo also requested that the public ministry close the case if a deadline cannot be set.

“I am announcing right now that if they don’t set a deadline to resolve this at the public ministry then they are going to have us in the streets with the Marcha de los Cuatro Suyos. I only want justice. I only ask for justice, nothing more. Why are they shaking with fear to make a decision?” Toledo said. “The judge returns the case a second time and five prosecutors put me on the hot seat for 27 months.”

Toledo warned that members of his Possible Peru party would march in the streets if the courts and prosecutors do not meet a deadline to conclude investigations. The Marcha de los Cuatro Suyos were a series of demonstrations led by Toledo in 2000 to protest election irregularities and corruption in Alberto Fujimori’s administration which led to its downfall. Toledo won fresh elections and served as President from 2001 to 2006.

Toledo also threatened to file a lawsuit with the Inter-American Commission on Human Rights. He alleged that the investigations are being directed by a “trilogy of evil” interests that do not want to make him look bad before 2016 elections. Toledo vowed to move the date forward for Possible Peru’s primary convention to determine its presidential candidate for 2016.

Most momentum from Toledo’s speech was brought to a halt by a coup within his own party. Speaking in an interview on national television, Toledo’s former housing minister and prominent Possible Peru congressman Carlos Bruce cast doubt on Toledo’s claims. “Nobody is going to endorse the very strange real estate deals in which he participated directly, and when they asked him for explanations he contradicted himself like five times,” Bruce told RPP. “And about convening a Marcha de los Cuatro Suyos because his case is being delayed, I would suggest as a dear friend that he not do it because nobody is going to follow him. Nobody will get behind him.”

Alluding to Toledo’s low approval ratings in polls ranking presidential candidates, Bruce also said that Toledo had contributed to his own fall from grace. “He has no chance in the 2016 elections.”

On March 27 Alejandro Toledo was charged with money laundering for his involvement in the Ecoteva case. Prosecutors also charged his wife, mother-in-law and two business associates. The indictment alleges the group used a Costa Rican company to conceal the source of over $9.4 million, which was repatriated to Peru to purchase real estate in Lima.

Tia Maria protest leaders walk out of talks in Arequipa