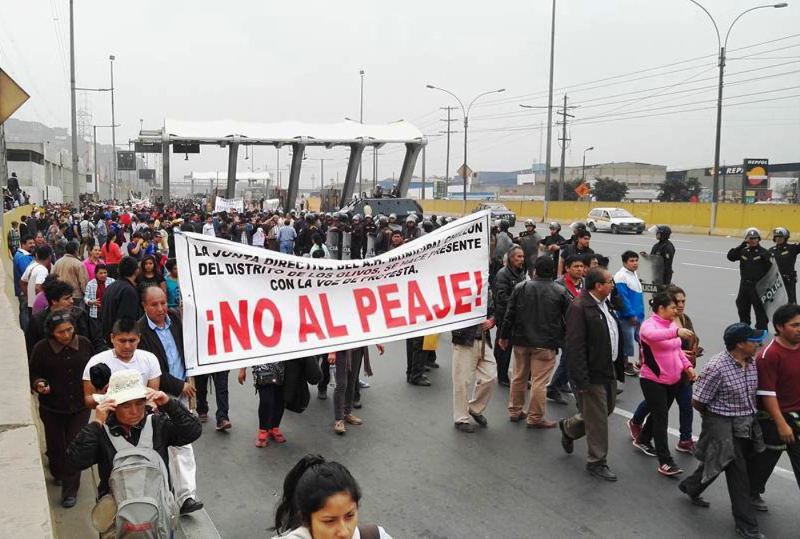 A transport workers’ protest which blocked the Panamericana Norte highway in north Lima left thousands of local residents without transportation on Monday.

Hundreds of demonstrators blocked the highway in Lima’s Puente Piedra district to protest a $0.30 increase in the toll fare for vehicles traveling between Lima and Ancon, a town just beyond the city’s northern outskirts.

Thousands of residents of Puente Piedra and other neighborhoods in the far north were stranded or charged gouging rates by informal taxis to get to work. America Television captured footage of protesters burning tires and isolated clashes with police. Five people were arrested after police fired tear gas to clear the road.

“No to the double toll which makes us poor. No to dividing Puente Piedra,” read protesters’ signs according to RPP.

The protest was led by drivers and operators of bus routes serving Ancon who also oppose new construction projects by the licensed contractor, Rutas de Lima. Ancon residents whose fares to Lima increased as bus companies passed the cost on to passengers also participated in the protest.

“What do they do with the money raised?” one protester told Correo. “Here in Puente Piedra, there is no development. The charge only harms us, we don’t want it. Rutas de Lima must remove this toll.”

The company says the rate hikes and a new toll booth in Chillon are allowed according to a 2013 contract with the city of Lima in exchange for performing 60 maintenance jobs which include repaving, widening lanes, installing traffic lights and building pedestrian bridges.

Transport workers have indicated they will march on Congress in the next week.