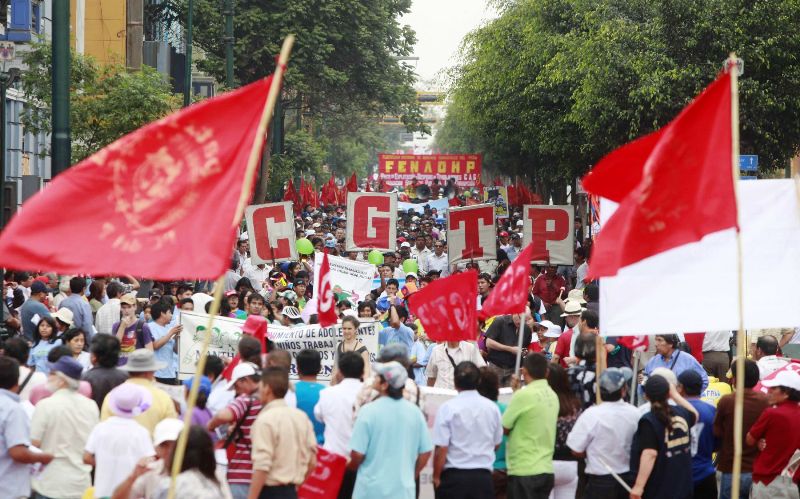 Peru’s largest labor organization held a national protest today to demand a doubling of the minimum wage and to protest crime and corruption.

The General Confederation of Peru’s Workers (CGTP) announced the protest in May to demand a minimum wage increase from $236 per month to $472.

The march was announced in May as a demonstration for minimum wage hike, but additional issues have been added. Workers are also marching to protest against corruption, crime and the rising cost of living in addition to various local causes.

“Our goal is to put the people’s agenda on the national agenda. We support the farmers’ fight for water, and the Andean and Amazon communities fight against environmental contamination. This will be an historic strike,” CGTP vice president Juan Gorriti said before the march.

Today’s march saw tens of thousands of workers start their march from various points in the city to the Dos de Mayo plaza downtown. From there, the union intends to march to Lima’s Plaza de Armas. The city placed 5,000 police on duty to prevent the march from reaching the Plaza de Armas and other cultural heritage points.

Thousands of workers representing dozens of unions marched in both Chiclayo and Trujillo. “We demand the government find a solution for the Tuman strike, which has gone on for 95 days, and the withdrawal of Grupo Oviedo,” said Wilmer Anton, CGTP leader from Lambayeque. “We reject the privatization of water. Lambayeque will come out to the streets in a major way, I guarantee it.”

In Iquitos, workers began their march at midnight by burning tires in the streets. Thousands marched in the protest which was largely peaceful besides some broken windows.

In Arequipa over 1,500 protesters marched in the Plaza de Armas despite a recent law prohibiting marches in the historic city center.

In Huancayo demonstrators blocked a key highway which led to clashes with police. A similar conflict occurred in Ica.

The common theme throughout the strike was the doubling of the minimum wage. In February, labor minister Fredy Otarola stated that the minimum wage would be increased this year. However he refrained from saying how much.

Otarola did say that the national labor board (CNT) would determine the amount of the increase in June. However Fredy Otarola resigned from President Ollanta Humala’s government after the historic censure of Ana Jara’s cabinet in April.