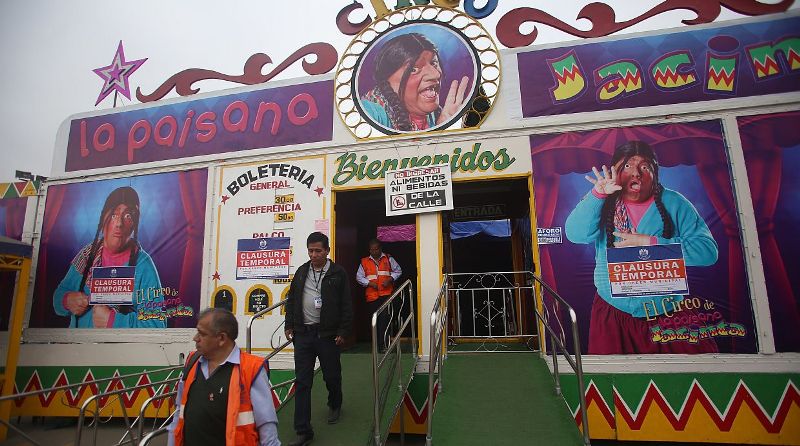 A grenade attack at the La Paisana Jacinta circus show injured at least 13 in Lima on Tuesday night.

“Inside the circus there is a lobby which is part of the tent. It looks like the explosion occurred there and so it affected the people who were closer to this public entrance area,” said an official with the fire department.

A private security guard from the area found a letter near the site of the explosion. The message was attributed to the local extortion gang, Los Malditos de Bayovar. The letter demands $15,700 from show producers and comedians Jorge Benavides and Alfredo Benavides.

In an interview on Peruvian television show Amor, Amor Amor, Jorge Benavides denied having received demands for extortion payments before the explosion.

“We have analyzed the issue because normally when there is extortion, the first thing they do is call. But here there was none of that. There were no threatening letters, just that explosion that scared all of us,” Benavides said.

Police have attributed the murder of two high school security guards to Los Malditos de Bayovar. They say they have arrested 40% of its members in the last two months. But they say the gang directed from leaders currently in Lima prisons.

The letter left at the scene of the crime also mentioned San Juan de Lurigancho district mayor Juan Navarro, calling him a “wolf in sheep’s clothing.”

The security guards’ murder plus another in which a high school principal was killed prompted Navarro to request the Peruvian military patrol the streets of San Juan de Lurigancho, Lima’s most populous district with over 1 million residents. Other Lima district mayors, including Callao mayor Felix Moreno, also requested a military presence to combat the extortion epidemic.

El Comercio reports that a grenade costs $47 in Lima’s illicit markets. An average of 16 are seized every month in Peru. In May a grenade was detonated outside a Miraflores bank, and in June two grenades were left undetonated inside a San Juan de Lurigancho school.

The La Paisana Jacinta circus, which opened last Thursday, is a franchise extension of Jorge Benavides’ controversial television show, which several social organizations including the United Nations have called racist for its portrayal of indigenous women.